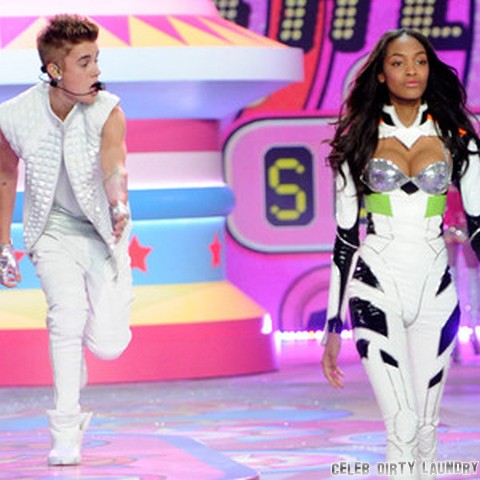 Justin Bieber’s idea of a cool pick up line is “you’ve got nice t*ts“. The goof never fails to entertain and/or mortify us with your antics. Bieber, after a spectacular couple of months where he got into fights, spit on his neighbor, and failed to make concerts, is now working his way with the ladies.

Poor Biebz has never been the most…[cough] manly [cough] guy, but he’s always seemed like he had a sweet relationship with Disney star Selena Gomez. Well, now that they’ve broken up, it seems as though he’s been going rampant. After trying to show off his big boy biceps with his teeny tiny wife beater and his baggy pants barely covering his ass, he’s been reported to be flirting aggressively with models. There were previous reports that this was the reason he and Gomez broke up, because he was rumored to be cheating on her with VS models.

However, after seeing the aftermath of the breakup and how both of them are handling it, I think we can safely say that it was probably Gomez who pulled the plug, hopefully before she made him cry.

So what’s the guy to do? Oh, you know, the usual. Go to a Victoria’s Secret show, and then tell a model that her t*ts look nice. VS Model Jourdan Dunn was on the Jonathan Ross show and she gave an anecdote of Bieber ‘flirting’ with her, explaining that he said, “You’ve got nice t*ts because you flashed to me and my dancers, made our day.”

She adds, “So then after the show we was chilling with Justin and he was kind of flirting with me and I kind of felt a bit awkward because he’s this little boy. He was 18 but I’m old enough to be his older sister, it’s kind of a bit weird. I laughed after it because he was 18 at the time and I was like ‘why not, flirt with the models, do your thing.”

It’s so easy to imagine – little Biebz puffing his chest and trying to flirt with the supermodels. He might not be too happy reading Jourdan’s version of the story though. I smell another hissy fit coming.