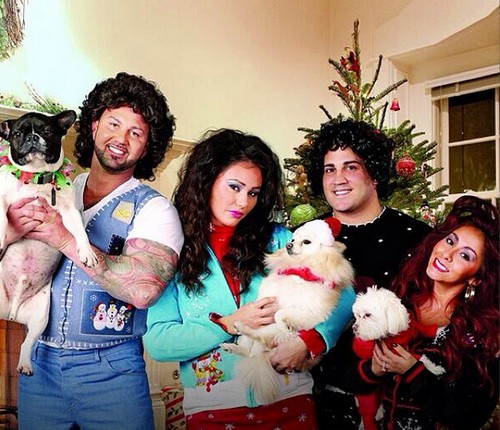 Jenni ‘JWoww’ Farley is pregnant with her first child. If all these Jersey Shore people keep having children, will the world end? Are these people qualified to be parents? Every time they’re on that horror of a show, they seem like the most irresponsible people on the planet. Either they were faking or they did some major growing up since the show wrapped. I’m hoping for the former, because I don’t know how much growing up you in can do in three years.

Anyway, JWoww announced the news by posting a picture of her sonogram on Instagram, captioning it with, “We couldn’t have wished for a better gift this Christmas!” JWoww is 27 years old, and this her first child. She’s engaged to Roger Mathews, 37, and this will obviously be their first child together.

JWoww also wrote, along with the image of the sonogram and caption, “Merry Christmas from within! We wanted to share this exciting news with you all first because you have been a part of our lives these past few years and seen the love between Roger and me develop and blossom. We are extremely happy and cannot wait for our bundle of joy to arrive!”

JWoww now marks the third Jersey Shore member to have a child, including Snooki and Pauly D. Pauly D was perhaps the most surprising, especially because he kept the news secret for a while. You never think that’s possible with reality stars that exhibit this much attention-seeking behavior.

JWoww’s child will reportedly arrive in the summer of 2014, and I’m sure we’ll hear much more about it then.