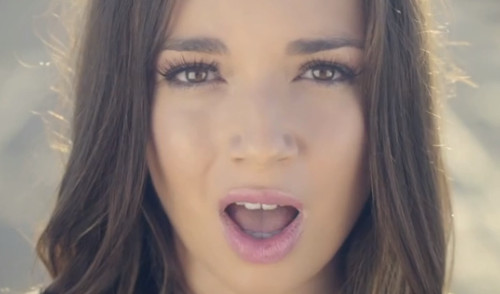 Kait Weston recently premiered the music video to her new song, “Til Death Do Us Part,” which is the official track for the soon-to-be-released Romeo & Juliet film adaption (due out October 11th). The song has a wonderful sound to it, and we were very excited to get the chance to ask her a few questions regarding her work. The music video contains exclusive footage from the film and was directed by Jay Martin, who also directed Christina Perry’s “Jar of Hearts” and “Thousand Years” videos.

Ms. Weston’s musical journey began on YouTube, where she posted brilliant videos of her covering chart topping hits. She moved to L.A. just two years ago to focus exclusively on her music, and now this New York native is zooming full speed down a road toward music super stardom! With a great sounding original song (written by her) under her belt, we’re excited to see where her future endeavors lead her.

Without further ado, we’d like for you all to meet Kait. We asked her a few questions, and below you’ll find her lovely and thoughtful responses. Don’t forget to check out her new music video (posted below) and also make sure to follow Kait on Twitter and check out her Facebook page.

1. Two years ago you moved to L.A. to dedicate your life to your music. How has that journey been for you, and where do you hope to be in a few years time as an artist in the industry?

Two years ago I told my mom I would be back in 2 weeks and never returned home. I had no idea what I was about to put myself through moving to this city, but I am so glad I took the chance. I had no plan, no place to live, but everything has worked far better than I ever dreamed of. Nov of 2011 I had a show at The Roxy and after my performance I was approached by Madison Jones and Suzanne Depasse of Depasse Jones Entertainment who had seen a video of me singing a cover of “Who You Are” by Jessie J.

I have been managed by them for the past 2 years now and they have fought so hard for me. It’s a blessing to have people who truly believe in your talent and do everything they can to get you to the top. The ups and downs are crazy, but if you put in the time, have a little faith, and wake up wanting to do better than you did the day before you will succeed.

I hope to be traveling and performing everywhere in a few years time! I want to meet everyone who has supported me and give them a high five plus a hug.

2. You said that you were inspired by “the chemistry between Hailee Steinfeld and Douglas Booth” after watching the trailer for Romeo & Juliet. And you don’t only perform the song beautifully, but you also wrote the lyrics. Can you tell readers a bit about the processes behind the creation of “Til Death do us Part”?

Thank you very much! I wrote this song with my friend Willy O’Riley at 1 in the morning and it took us only 2 hours (which never happens) to write. I wanted to write a song that every generation could relate to and fall in love with. The chemistry was perfect. I think it will bring a lot of people back to when they were young and found their first love. Some lyrics like “Sleeplessly dreaming of the love that came from above the test of time from my heart to yours” came from my own experiences of finding that someone whom I couldn’t stop thinking about.

3. What’s it like to hear a song of yours being associated with one of the most epic love stories ever told?

Incredible! We have been working on this project for about 4 months and being able to show everyone now is so exciting! It’s such an honor to have my music on a motion picture with Oscar Nominated actors. Paul Giamatti, Damien Lewis, Ed Westwick, Douglas Booth, Hailee Steinfeld, and Douglas Booth, to name a few, all star in this wonderful movie! It’s most definitely a “is this real life?” moment.

4. What other musical projects are you currently working on?

I am in the middle of writing an EP and hopefully getting an album out by next year!

Jake Gyllenhaal and Ryan Gosling…I bet you could have guessed that though.

Thanks so much, Kait! We love the song, and we can’t wait to see what you have in store for us in the future!