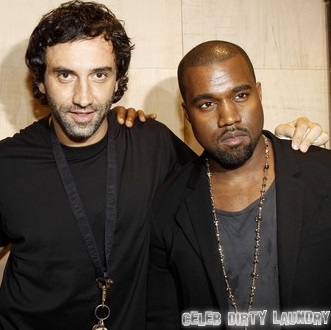 It sounds like Kanye West really has his priorities messed up – or does he? The rap mogul has chosen not to be by Kim Kardashian’s side for the majority of her pregnancy, a decision that has pissed off the entire Kardashian clan. But Kanye looks out for himself first and foremost. He has no idea what it’s like to put anyone else ahead of himself and so it’s unthinkable that he would want to be caring for his baby mama.

Instead Kanye has opted to all but live these last several months in Paris, near his BFF Riccardo Tisci. The problem? Well it’s a biggie. Riccardo is proudly gay and according to the May 27th print edition of In Touch, he and Kanye are so inseparable that they appear to be a couple. Adding to the heat of this story is the newly learned nugget that the main reason Kim refused to date Kanye for all those years was because she really believed that he was gay!

It really does look like Kanye is choosing to stay in Paris to be close to his boyfriend and that alleged need is making it a whole lot easier to be a country apart from Kim. He’s happy in Paris and the minute his feet touch American soil Kanye becomes miserable and volatile because his life here, at least for now has been reduced to a 200 pound obligation with bad fashion sense.

Kim is reportedly flipping out at the thought of Kanye shacking up with Riccardo while she is the pregnant laughing stock here at home. According to a close source Kim thinks that Kanye eventually being outted will absolutely ruin her career and make her look even more foolish then she manages to look all on her own.

Do you think that Kanye and Riccardo are more than friends? Is that why he stays overseas? Celeb Dirty Laundry’s advice to Kanye is to be who you want to be – if you are gay or bi then celebrate it and flee the Kardashian yoke while you still have your balls – look what happened to poor Bruce Jenner.  The Kastrating Kardashians will get you if you let them.