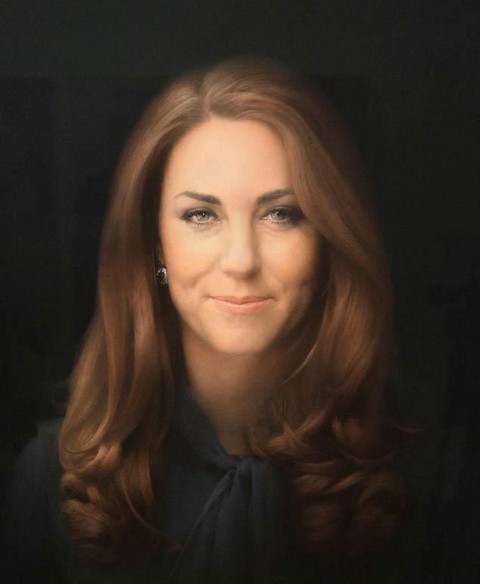 A new artist has painted another portrait of Kate Middleton after the official one created by artist Paul Emsley was criticized for portraying the Duchess as “ageing,” “unflattering,” and just plain “rotten.” This new portrait is being applauded for showing the “real” Kate – warm and human.

Seriously? This is supposed to be a more accurate version of Lazy Katie? Honestly, it’s just more palace PR BS to make Waity look good after the negative press she’s received lately for her endless vacationing and lack of work ethic. And could the palace be more transparent to release this the day before Kate has an official engagement to Grimsby? They must’ve got wind that there won’t be a massive turnout to cheer on their darling duchess, but instead the few people who will be there will either be booing her or standing silently as they watch her parade around in her fancy clothes and look down on them. Of course, the reports will be that large crowds turned out to wish Kate well, but the included photos of these so-called crowds will be of the press and police officers who were the main people there… because they have to be there.

If an artist was to paint a truly accurate portrait of HRH The Duchess of Dolittle, then they should show her on one of her usual holidays sunbathing and skiing. Or out shopping. Or getting her hair done. Or wearing a $1,000 coat to walk her dog in the park.

They should just scrap the official portrait altogether to clear room for the ones of people who actually matter because they work hard to make lasting contributions to further the advancement of humanity. The people will only warm to a “warm” Kate until she shows she deserves their respect by doing a proper day of work as a royal.

The problem with the original portrait wasn’t with the painter, but with the subject. Yes, there’s an evil, cold, calculated look in Kate’s eyes, but the artist merely painted what he saw.