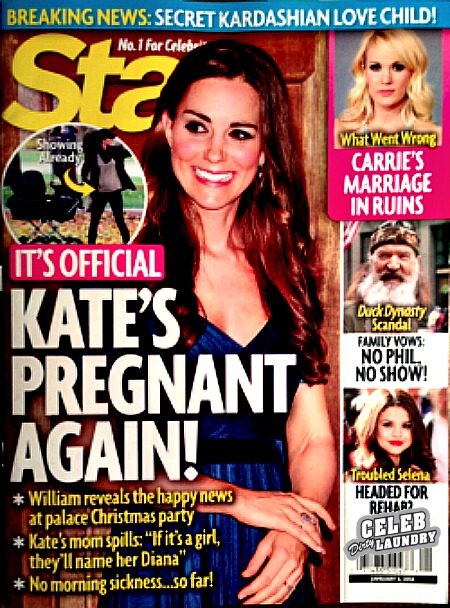 According to a recent edition of Star, Kate Middleton is pregnant with royal baby #2! The magazine’s giant headline reads, “It’s official, Kate’s pregnant again!” and goes on to say that she’s yet to experience any morning sickness. Hurrah! The mag also reveals that Prince William shared the glorious news at a palace Christmas party. There have been many rumors going around gossiping about the possibility of Kate being pregnant a second time but, unfortunately, no official announcement has been made.

Do you think Kate has a bun in the oven? People have said that they’re on a five year plan, meaning they want to have a family started within that time frame. If she is in fact pregnant, it seems as if they’re moving along according to plan! The magazine also reveals that, should the new baby be a girl, they’ll plan to name her Diana, after Prince William’s late mother.

This edition of the magazine also highlights some recent tragedies/disasters of the celebrity world, including Carrie Underwood‘s crumbling marriage (after her alleged affair), Selena Gomez‘s potential journey into rehab, and Phil Robertson‘s anti-gay scandal. Pick up your copy of the magazine today.

Let us know your thoughts in the comments section below. If Kate is in fact pregnant with a new lil’ royal, prepare for a second round of pandemonium. It’s only a matter of time before she does get pregnant again. When she does, do you think the media storm will be as crazy as last time?