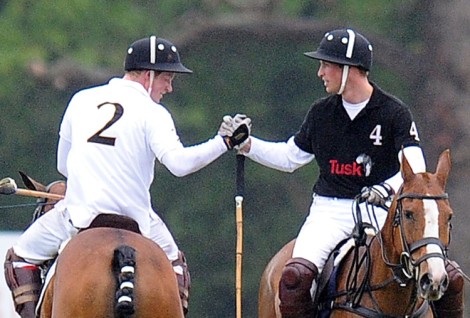 Looking at all the photos this morning of Prince Harry kissing Cressida Bonas on the ski slopes all I can think about is Kate Middleton and Prince William circa 2004 in Klosters. It was her first real coming out party to the media. She got caught vacationing with William and the palace had to react. Naturally, they were considered “just friends”. They wouldn’t be caught kissing while skiing for a good two years later and, even then, it wasn’t anything like Harry and Cressida’s love fest. Only polite, nice pecks will do for William in public thank you very much. But this is what any royal girlfriend (maybe wife?!) of Harry’s will have to deal with. He’s spontaneous. He’s loving. He might be just a tad bit embarrassing and out of control but he’s fun damn it and that’s why we all love him so much.

And this wasn’t just a vacation for Cressida. This was sort of a family trip. Harry was joined by his uncle Prince Andrew along with his two daughters and ex-wife Sarah Ferguson to celebrate Andrew’s birthday. This is way interesting. I thought Harry and William were asked to stay away from Sarah. She wasn’t even invited to the royal wedding and there are no known instances of Kate acknowledging her so the fact that she hung out with Cressida and even, according to the Daily Mail, had some heart to heart talks with her is fascinating. Did she have advice for Cressida? Sarah also married a second son so the similarities are there. I’m thinking Prince Harry’s girlfriend may not be his girlfriend that much longer.

You’ve got to hand it to Cressida. She got through the Las Vegas debacle. She got through a tour of duty and she’s taken a page from Kate’s book and remained quiet. She doesn’t seem to court the spotlight but she doesn’t seem to abhor it like Chelsy Davy did. Harry’s made it known that he’s keen to find a partner like his brother did. Could Cressida be it? She’s blond, beautiful and educated enough and doesn’t seem to mind to look the other way when necessary (another thing Chelsy abhorred). She might just work out. But will Kate be able to handle it? Cressida might just be a tad bit taller and a tad bit skinnier!

What do you think? Does kissing on ski slopes mean Cressida’s got the royal seal of approval?