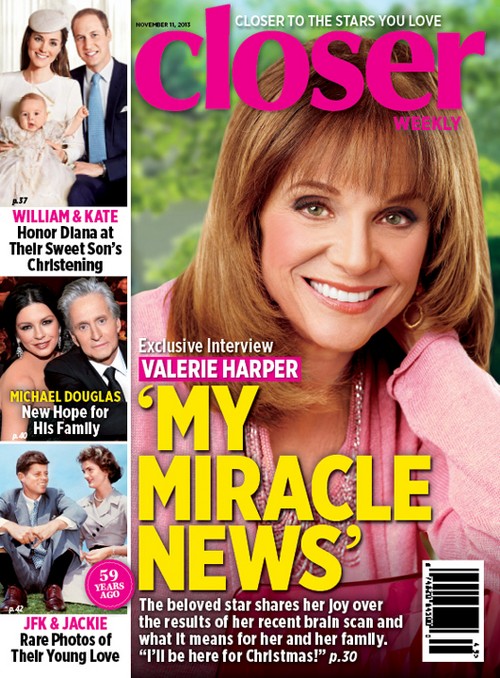 Although Closer Magazine in Europe may be best known for breaking Kate Middleton‘s naked pictures, the debut of Closer U.S.A. proves that the magazine might be heading in a different direction stateside.

Most of these cover stories are already days or weeks old, and their most intriguing story is one that we already know. They have a short section on how Prince William and Kate Middleton were honoring Princess Diana with Prince George‘s Christening, but we’d already heard that even before the Christening happened. It was a conscious decision by William to hold the Christening at the royal chapel in St. James Palace, considering it’s where Princess Diana lay the night before her funeral. A royal source had previously told the Daily Mirror, “This was a personal decision for William and Kate. It was important to him to remember his mother on this special day.”

Along with the story, they also featured one of the royal portraits released from the Christening, the one showing William, Kate, and George together, with George throwing his hands up in the air.

Another headline on Closer’s cover is Michael Douglas and his relationship to Catherine Zeta-Jones, and how he has ‘new hope for his family’, probably referring to the rumored reconciliation between Michael and Catherine. The couple never formally separated, only announcing that they were taking a ‘break’, but it seems like they’re slowly on the path to getting back together.

There’s also an exclusive on some old photos of JFK and Jackie Kennedy, but the main story is leading on an exclusive interview with Valerie Harper and her ‘miracle’ news. According to the interview, Valerie’s cancer has regressed, with Valerie explaining, “(My doctor) said, ‘At the rate we are going, you don’t have to worry. You will see Christmas!'”

What do you guys think of Closer’s debut US issue? Let us know your thoughts in the comments.