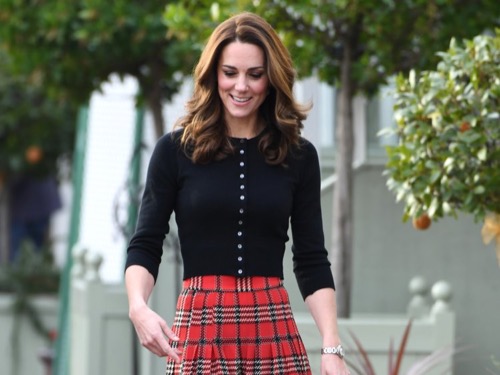 Well, this is disgusting. The new cover of Star Magazine shows Kate Middleton pregnant and naked, with a title screaming, “Royal Scandal: The photos that shocked the Queen.”

Is Star that desperate? That photo is clearly photoshopped, and I wouldn’t be surprised if the royals sued. We know Kate didn’t pose for any naked photos while she was pregnant, a trend that has become increasingly popular over the last couple of years. She stayed mostly undercover throughout the pregnancy, and the last revealing photos the public got of Kate was when those naked pictures were released last year. However, that was when her pregnancy bump wasn’t even showing, so I hardly think that the report is referring to those pictures.

So if it wasn’t those pictures, what else could it be? It’s Star, so I wouldn’t be surprised if they just made up a story about these ‘photos’ being taken and found by the Queen. That being said, I don’t think they’ll have more photoshopped naked photos of Kate in their issue. At least, I hope they don’t, because that’s pretty much a lawsuit in waiting.

The picture on the cover is also quite revealing, with ‘Kate’ covering her chest and her private regions. Her bump is clearly visible, and you have to wonder what poor person was used as the body when Kate’s face was used as the head. It’s almost grotesque, and this is where tabloids should draw the line at their coverage. Again, I know I’m repeating myself, but it’s Star Magazine. Since when have they ever had standards?

What do you guys think about the report? What pictures could they be referring to? Let us know your thoughts in the comments.