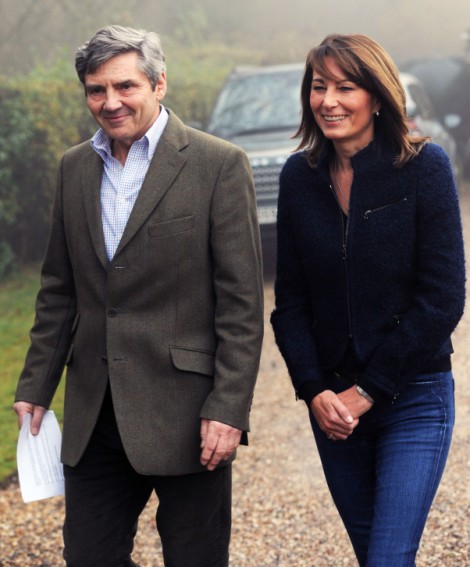 And people thought the Middletons had reached their ceiling. They got a daughter in the big house, millions of dollars in the bank and a royal heir grandbaby on the way. The only place to go from there is down. Not so! Kate Middleton’s parents might be getting titles making the middle class commoners common no more. Biotches please, if you ever thought Pippa Middleton considered herself common….

This might not just be a magnanimous gesture from Queen Elizabeth. It turns out tradition is at stake. For the past 1,000 years no royal heir has had an untitled grandfather. So, really, it’s just so the Middletons don’t embarrass their grandchild with their dirty working man’s finger nails. All Lizzy needs to do is suggest it to the Prime Minister who, in turn, recommends it back to her which sounds like a colossal waste of time but whatever, it works I guess. The Daily Mail reports that Michael Middleton will probably be awarded an earldom which will make Carole Middleton a countess, James Middleton something or other and Pippa Middleton a lady. Can you believe it? Finally! Lady Pippa or Lady Philippa. Personally, I still prefer Princess Pippa and continue to keep my fingers crossed for it to happen. If Olivia Wilde can marry a prince why can’t my Pips?

And before all you Middleton haters start freaking out remember that it’s just an honorary title. It means virtually nothing. It’s not like Michael’s going to join parliament or anything (although Carole might still move into Kensington). It’s just a title. Kate Middleton’s parents deserve it for introducing Kate Middleton into Prince William’s life, yes?

Do you think Pippa will go by Lady Philippa from now on? God, I hope so. Now she can sit in the royal box at Wimbledon every year! Some girls have all the luck.