Katie Holmes Paranoid To Be Seen With New Boyfriend, Worried What Tom Cruise Will Do? 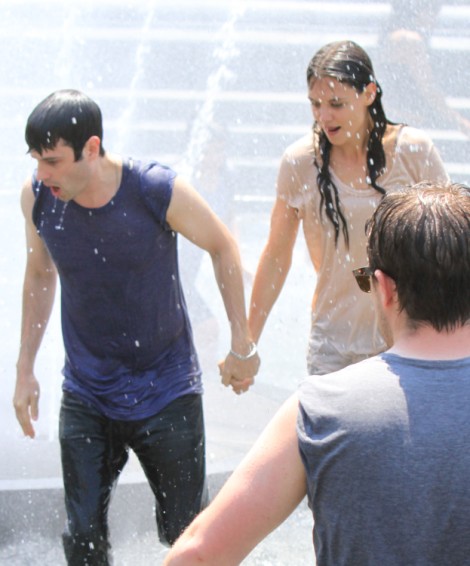 It seems Katie Holmes isn’t too comfortable with her new romance making headlines. Just days after the two strolled merrily down the NYC streets oblivious of just about everyone watching their every move, Katie has changed tactics and decided to go under the radar.

According to the New York Daily News, the former Mrs. Tom Cruise  has become incredibly camera shy all of a sudden with Luke Kirby. “She bolted, jumped in the back of a cab and lied down in the back seat,” says one spy after Katie was caught walking with Luke. “Meanwhile Luke walked to a falafel place on MacDougal St. and was texting furiously and looking around. All of a sudden, Katie comes down the street. Normal people don’t act like this.”

Normal people also don’t marry Tom Cruise but whatever. Apparently the couple was also spotted almost holding hands but jumped away from each other when they noticed cameras. This is very different than before, yes? Who will ever forget the Katie/Tom summer of romance filled with Parisian trips and motorcycle rides? Has Katie just learned her lesson or is she afraid Tom’s going to find about her new boyfriend and stalk her with his scientology peeps again? I wouldn’t put it past him. If this dude is around Suri you  know Tom’s going to want the details on everything about him. Ugh, if you were Luke, would you want to get involved with that? Still… it is cute to see Katie so carefree and happy, no? I’m anxious to see where this goes. She doesn’t have to marry the guy but it’s comforting to know she can still converse with normal people. Scientology didn’t suck all  of her personality away!

Who should Katie Holmes’ boyfriend be more worried about – Tom Cruise or the paparazzi?