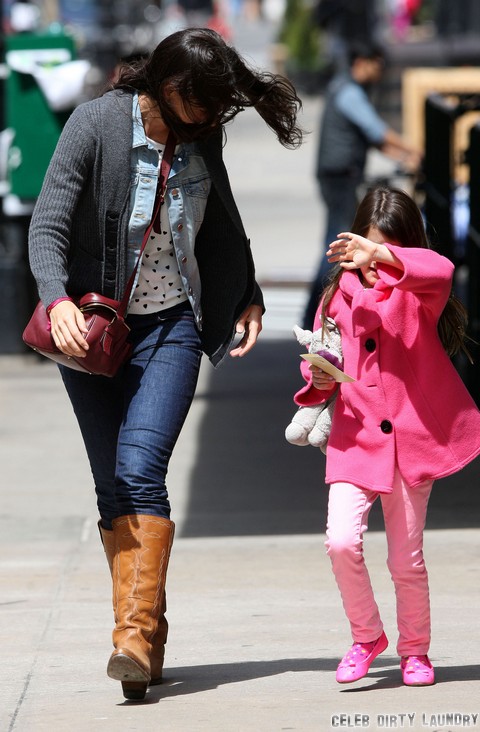 Katie Holmes always did seem like one of those moms that would be overly protective of her children. There’s a new report from the National Enquirer that states that Katie has ‘sparked other tennis moms’ fury’ when she stopped other parents from taking pictures at her daughter Suri‘s tennis lessons.

A source told the Enquirer, “Holmes is causing a racket at daughter Suri’s tennis lessons. She had the parents of other kids in the group program banned from watching the classes.” The source continues, “Katie doesn’t want anyone staring at Suri or snapping her picture.”

The article goes on to state how Katie wants the other moms and parents to ‘disappear’ until Suri and the other kids finish playing.

Ok, I get that Katie is protecting her child, but this is ridiculous, right? So ridiculous that I have a hard time believing it’s true. If Katie really did try something like this, she’d have her ass kicked by those other moms. Have you guys ever met New York moms? They would never take someone telling them what to do and when to do it, especially concerning their own children.

While I don’t doubt that Katie is probably trying to prevent others from taking pictures of Suri and selling them to tabloids, I don’t think she would go to the extreme of telling the other moms not to even be there. And if she was so worried, there is something called private tennis lessons. If she’s choosing not to take that option, then she has no right to prevent others from taking pictures of their own children. This whole story seems ridiculous, so I’m calling BS.

What do you guys think? Has Katie Holmes become a ‘mom-zilla’? Or are the tabloids making stuff up again?