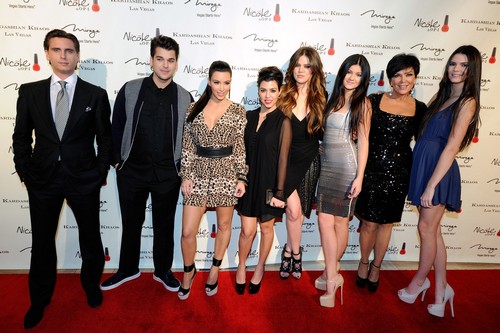 Tonight on E! KEEPING UP WITH THE KARDASHIANS continues with another new episode called, “Paparazzi & Papas.” On tonight’s show Bruce secretly trains Khloe¹s dog.  Did you watch last week’s episode 15? We did and we recapped it here for you.

On last episode Kim pushed Khloe to consider adoption, but Khloe had other things on her mind. Meanwhile, Kris suspected that Scott sold the scooter she gave him and Bruce secretly trained Khloe’s dog.

On tonight’s show with her due date approaching and the paparazzi growing more out-of-control, the family wants Kim to devise a plan for when she goes into labor. Meanwhile, Khloe and Kourtney try to set up their grandma, MJ, on a blind date.

RECAP: Khloe and Kourtney go to a sauna like place, where you lye on a heated bed; it’s supposed to make people burn a lot of calories, it looks like the easy way to lose weight for those who don’t like to work out. Khloe and Kourtney talk about how Kim looks much prettier without make-up, Kim calls Kourtney and they talk about wanting to have her hair done, make-up done and more just for the birth of her birthday. Khloe, Kourtney, Kim and Kris are talking about how Kris recently went to show MJ some condos. The family want MJ to move closer to the entire family, to make it easier for them to visit. MJ’s husband passed away a while ago, they want to keep her company. MJ decided to not take Kris’s offer, she wants to stay where she currently is at. The four women start to talk about how MJ should see someone new, maybe go to a bar. Khloe, Kourtney and Kim are talking about Kim being pregnant. Kourtney doesn’t know how they’ll get Kim out of the hospital, but to make matters better; Kim forgot to book a hospital for her labor. Kim calls the hospital to book a room for when she goes into labor. Bruce and Kylie are driving together, while driving they see paparazzi. Bruce is a not happy to know that Kylie is afraid of getting her license due to the fact that she’ll be followed by paparazzi. Bruce tells her to not bother with the paparazzi, that he’ll deal with them. Bruce gets out of the car to have a word with the paparazzi, he ends up getting verbally violent with them. Bruce gets them away, while Kylie is in the car.

Kylie calls for Bruce to get back in the car, Bruce mentions that he won’t deal with the paparazzi’s shit. Kylie is afraid of their being guys following her while she’s at the age of 16, Bruce says that he would go crazy if there was paparazzi following him. They understand that it’s not Kim’s fault, Bruce decides to call Kim about the paparazzi stalking around for pictures of them. Bruce believes that the paparazzi were so obnoxious. Kim and Khloe decide to sign MJ up on a senior dating site, they want her to be with someone whether they’re romantic or not. Kim and Khloe don’t know what the meaning of baby boomer means and makes me feel upset, they’re looking for guys for her. The two of them don’t ask MJ about doing this for her, they don’t think about her feelings. Khloe and Rob speak about Britney Spears for a bit, Khloe then calls about paparazzi taking pictures from a bush. Khloe mentions how she told them that she was hit by the car, but not run over. Rob says something smart that they need to accept what the paparazzi do and not think much about it, because they can’t win against them. Kim wants to get in shape after having her baby, to do a shoot for Playboy or something that involves being naked. Khloe mentions how the paparazzi have been getting pretty aggressive lately now that Kim’s about to have her child soon. Kourtney wants to make a plan for when Kim goes into labour, Kourtney mentions how great Kim is at handling the paparazzi.

Khloe talks about the dating profile she and Kim made for MJ, to both Kourtney and Scott; they’re going to meet the guys to see if the guys are good enough for MJ. Khloe is with Leah at the beach house, Khloe asks if Lea would be able to live the life of Kim. Leah mentions how much different her life is compared to Kim’s. Khloe talks about how the family has been talking about how Kim needs to make a plan for when she gets in to labour, but Kim is not in the mood for that idea and wants everything to fall in place on its own. Kourtney talks about how they found potential guys for MJ, they want to call the guys to give them an interview of some sort to get to know them. Now they want to meet the guys before hand to make sure that the guys are safe and good for their grandmother MJ. Leah wanted Kim to come over to her place to and live her lifer to give Kim a moment of relaxing. Leah is happy to see Kim looking calm and embracing in what she’s doing. Khloe and Kourtney are at a restaurant to meet with the guys, they’re three guys who made the final cut; they want to make sure that these guys are good enough for MJ. They ask the guys a couple of questions to see who they’re like, so far Walt is just hitting it out of the park. Khloe admits that they’re all great guys, that there’s potential in all of them. Kim shows a picture of her baby to Leah Leah is shocked by the picture and thinks it looks just like Kim. Kim asks Leah to drive her pickup truck, she’s never done it before and it seemed like fun at the time. Brandon gets in the car with Kim and Leah, probably to make sure no problems happen while they’re on the road. Kim isn’t happy knowing that the paparazzi know her every move.

Khloe and Kourtney talk about the guys that they met, Scott doesn’t look like he’s all for the idea. Kourtney asks if they should tell MJ about what they’re doing or if they should bring the lucky guy to meet her. Kourtney and Khloe are talking about which man would suit MJ perfectly. Km goes to the doctors to get herself checked, the baby weights five pounds; the doctor finds some bad news, the baby is pretty low. It turns out that Kim will be having the baby far more sooner than she expected, Kim isn’t ready for this because she wants to make sure her baby is heathly and that her plans are made on time.

Turns out the lucky guy is Walt, Kourtney and Khloe call MJ and tell her about what they did for her on the dating site. MJ is kind of worried about the situation, they’re going to be eating lunch together; but they want MJ to at least say hi to the man at the end. Kim arrives home and sees a whole bunch of paparazzi taking pictures of her, it’s insane how many people are there, Kim doesn’t want them to be on her property. Kim understands now that she needs to make a plan for when she goes into labour, because the amount of paparazzi is insane.

Kourtney and Khloe are a bit surprised to see that MJ is not interested in meeting this man at all, MJ seriously doesn’t look like she’s happy about the idea at all. MJ once again says that she is not interested and is deciding to leave from the restaurant before Walt shows up. Walter shows up and the girls have to give him the bad news, they mention how their grandmother isn’t ready to date. They’re not happy with breaking Walt’s heart, but Walt takes it well and understands. Kim is talking with Kourtney and Khloe about how them and their friends lives are changing. Kim is worried about the paparazzi, how they’re getting more aggressive lately.