BY Joanna Mazewski on October 27, 2013 | Comments: one comment
Related : Keeping Up With The Kardashians, Reality TV, Recap, Television 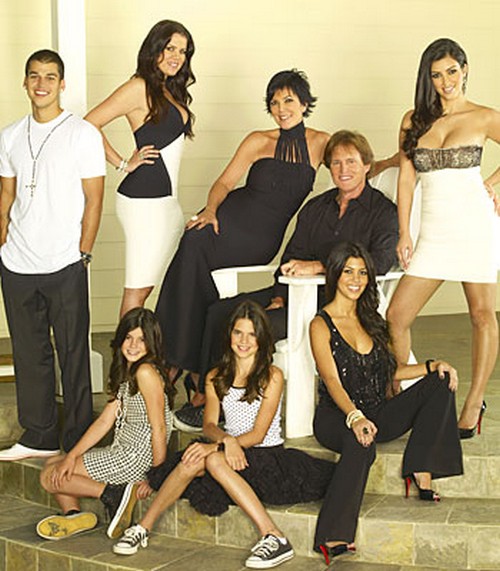 Tonight on E! KEEPING UP WITH THE KARDASHIANS continues with another new episode called, “All Signs Point To North.” On tonight’s show Khloe tries to make peace with what’s happening in her life.  Did you watch the last episode before the hiatus? We did and we recapped it here for you.

On last episode before the hiatus with her due date approaching and the paparazzi growing more out-of-control, the family wanted Kim to devise a plan for when she goes into labor. Meanwhile, Khloe and Kourtney tried to set up their grandma, MJ, on a blind date.

Kim needs to deliver earlier than planned to try to avoid the paparazzi.  Kris prepares the house for her new granddaughter’s arrival, Brody gives Bruce advice on a new friendship, and Khloe tries to make peace with what’s happening in her life.  So we may get a chance to seem some scene’s from Kim’s delivery of North.

RECAP: Kim, Khloe and Kourtney are looking at baby clothes together and talking about labour, it then cuts to Las Vegas we see see Bruce is showing his son his best friend Jeff Dunham. Jeff arrives at the table and pulls a quick joke, the entire time they seemed to enjoy their meeting with Bruce’s best friend. Khloe is walking the streets with Lord Disick, they’re walking around the streets and interacting with people. Khloe and Scott meet Tim, a man who’s probably a prostitute, Scott was affected a little by what he saw. Bruce and his sons go to Jeff Dunham’s show and watch him perform. Bruce then goes to a nightclub with his sons, along with Jeff Dunham. His sons are happy to see Bruce letting loose for a night, Bruce is seriously not going light on the shots. It cuts to Kourtney and Scott’s home, Khloe Kourtney, Rob and Scott are there. Khloe mentions to Kourtney how Scott and her went and met a guy named Tim, Kourtney doesn’t understand why Khloe even cares; because she doesn’t find that it’s easy to relate to them.

Bruce goes to a bar with his sons, they both ask how Bruce’s girlfriend is doing; though they were talking about Jeff Dunham. Bruce’s sons are worried about Bruce coming on too strong with Jeff Dunham, because he’s never had a best friend in a long while. Bruce doesn’t see it at first, but he sort of understands what they mean. Bruce takes his son’s advice on this bromance. Khloe and Rob are on the road looking for Skid Row, they arrive and see several people who are clearly homeless. Khloe is interested in the people’s stories of how they ended up on the street, she wants to go out and ask questions; Rob says something intelligent, it’s the first time in a long time; that Khloe should not go in and talk to the people that it would not be right.

Jeff Dunham arrives at Bruce’s house, Jeff mentions how he was worried about Bruce because he didn’t call much. Bruce mentions how his son Brody said that he was coming on too strong, but Jeff tells Bruce that there’s nothing wrong with what they’re doing; that if Bruce ever pisses him off or something he would tell him. Jeff breaks and egg while trying to juggle them, they seem to have a strong bromance that will live on Khloe arrives at a Downtown Women’s Center, a woman named Camille talks to Khloe about what they do here. Khloe is serving women food, Khloe wants to sit down and talk to everyone about it. Khloe mentions how a friend mentioned about the center and she thought it would be a good idea to go down there; the women talk to Khloe about their lives and how much they’ve struggled in their life so far. One of the ladies mention how she had to get treatment in order to get over her addiction and it looks like Khloe’s been affected in some way. Khloe feels honored to be able to spend a day with all these women, she then leaves. Khloe receives a call from Kim, Kim mentions that she needs everyone to cancel their day; because she has toxemia which means that her liver is shutting down, it seems that Kim will need to deliver her baby today.

Kim asks Khloe to contact their mother and let her know about what’s going on, after the conversation with Kim; Khloe calls Kris and they talk about the situation, Kris wants Khloe to head home so she doesn’t draw too much attention. Kris is on her way to pick up Kim to the hospital, Khloe arrives at Kourtney’s home and tells Kourtney about the situation that’s going on with Kim. Khloe decides to call Kris, Kris isn’t all there; she’s a bit emotional about the whole situation with Kim. Kourtney believes that they need to be patient and wait for when they’re able to go to the hospital, Khloe feels helpless and scared while waiting for a phone call from her mother. Kris calls that her and Kim are in the car, they’re now on their way to the hospital. Khloe is relieved to hear the news, they’re now going to head to the hospital themselves. Khloe is recording Kim via her phone’s camera. Kris is very excited to meeting her new grandchild, Kim is talking to the camera this is directed to her daughter, that she’s excited to see her born. Kourtney is happy to know that she’s going to be a aunt, and for her kids to have a little cousin. Khloe is very excited about the entire thing.

Khloe arrives at Bruce’s house, she talks to Bruce about the entire situation with Kim. Bruce mentions that his goal is to have thirty grand kids before the day he dies and this is another on added to that goal. Khloe leaves Bruce’s place after they’re done speaking; Kim receives a giant thing of balloons. Kris is now working on getting all the baby stuff together, since the baby is early. Now Kris is cleaning out the garage to have more room for the babies stuff, Kris is now freaking out. Kris calls Kim to check on her and the baby, she wants to know when Kim will be coming home at. Kris mentions how crazy her kids are and that one day they’re going to give her a heart attack. They’ve gotten the babies room ready for when she arrives, it turns out that Kim will be having to come tomorrow due to there being more tests that must be done before she comes home. Kris is a bit disappointed to know that she’s going to have to wait for a day, but she’s going to wait till then. Kris mentions how she did the babies room all by herself, to Kourtney, Scott and Khloe. It turns out that the way Kris arranged the room is wrong, Scott mentions that these are her responsibilities due to her inviting Kim to her stay at her home.

Kris then shows Scott and Khloe where Kim and Kanye are going to be sleeping; Kris got Dr. Boris to come and give all the adults whooping cough shots for the safety of the baby. Dr. boris speaks to Khloe about the shot, Khloe is clearly nervous about it. Though in the end it was like nothing for Khloe, the entire family end up getting the shot. Kim calls to let the family know about the name of her child, Kim calls to see if she can just call the baby North without a last name. Kim and Kanye arrive at the house with the baby.

Khloe mentions how she can’t deal with Kim being a Kourtney 2.0, Khloe talks to Kim about labour; Kim mentions how it wasn’t that hard, but she felt this deep connection with her daughter. Khloe is excited to see how Kim is happy with her daughter, Kim wants to come back looking good later on. Kim mentions how Kanye doesn’t feel comfortable with having their daughter’s picture in a magazine. Khloe mentions how she thinks it’s cute that Kim said that North is her best friend since she spends so much time with her. It then shows flashbacks of Kim and her journey with becoming pregnant and everything that comes with it. Kim says that being pregnant was an important learning experience in life, she can’t wait to be a mom.