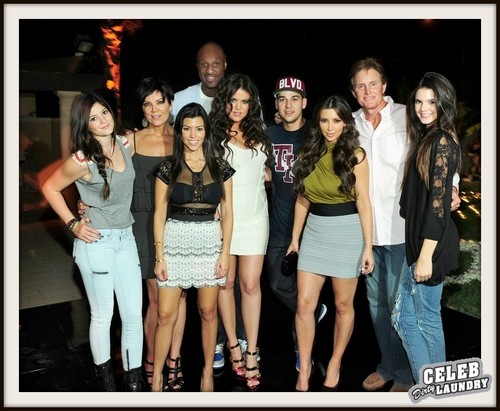 Tonight on E! KEEPING UP WITH THE KARDASHIANS continues with another new episode called, “Baby Shower Blues.” On tonight’s show Bruce secretly trains Khloe¹s dog.  Did you watch last week’s episode 15? We did and we recapped it here for you.

On last episode Kourtney and Khloe could not believe that Kim didn’t want a baby shower, so they planned one behind her back. Meanwhile, Kris and Kylie plotted to get rid of Bruce’s gun and Khloe got self-conscious about her body.

On tonight’s episode Kim pushes Khloe to consider adoption, but Khloe has other things on her mind. Meanwhile, Kris suspects that Scott sold the scooter she gave him and Bruce secretly trains Khloe¹s dog.

Meanwhile the Kardashian star seems to be burning out.  Each week the KUWTK show is getting less and less people tuning in.  It seems people are no longer interested in what the Kardashian Klan is doing.

RECAP: Everyone wants to know where Lamar is, Khloe tells her family that Lamar is at a training camp; Scott believes that Lamar is at the house, Khloe and the family are looking everywhere for Lamar and he’s no where to be found. Khloe questions why she’s in a bad mood, Scott goes along with it. Krs loves having everyone spend a day as a family, by going to the spa and do relaxing things together. Khloe wish that she brought her dog with her and Bruce agree and would like to bring his dog also. Bruce believes that Khloe doesn’t know how to train her dog, that the dog is a mushy little wimpy dog. Kim is choosing how she wants the baby’s room to be like, along with Khloe and Kourtney. Khloe starts being a little bitchy about her sisters having kids, clearly Khloe is completely jealous of the two of them. Khloe meets up with Bruce, because he wants to train Khloes dog to be some what better. Bruce believes he could train the dog very well, Khloe’s dog Brenard ends up putting a hole through a blanket of his. Bruce wants both Khloe and and Lamar to discipline their dog, and he can tell that it’s both their first dog and they have no idea what they’re doing. Kim and Kris end up having lunch together and talking about something I’d rather have not heard about, Kim then mentions if Khloe should adopt a child or something. Kim is worried about Khloe and her wanting a child of her own, Kris believes that she isn’t ready.

Kris eats lunch with her son, they talk about irrelevant things. They’re talking about Christmas, how Scott probably sold motor scooters that she bought the entire family and that Scott might have sold it. Kris goes to the garage with her son to see that he did indeed sell the motor scooter along with one Kris bought Kourtney. Kris searches more throughout the house to find more things of Lord Disick. Bruce invited Rob to his place to help him train Bernard, Bruce is dead set on training this dog. Bruce starts off with leash training Bernard, he wants Bernard to learn how to sit and does it quite quickly. Bruce finds out that Bernard ended up doing business on the floor, Kourtney received a call from her mother that they should all go on a family trip with their motor scooters. Kourtney finds that Scott never opened his Christmas card from Kris Jenner, Scott ended up reading it, but doesn’t look like he feels all that bad about selling the motor scooter. Khloe ends up finding Kim out by herself in the grotto, Kim wanted to meet with Khloe there to talk about having children. Khloe finds that her family is being very pushy with her, Kim mentions that Khloe should try meeting with an adoption attorney to be informed about adopting a child, that Khloe should know about her options. Kim feels that Khloe might be into adopting a kid, Khloe ends up laughing, Kim knows that when Khloe laughs it means that she’s uncomfortable and scared about it. Khloe ends up walking away.

Kris is with Rob driving, Kris mentions that she called Kourtney about the family motor scooter trip; Kris calls Scott in the car to try and catch him off guard. Scott tries to cover it up easily, saying that he’s ready whenever they are for the family trip. Khloe is with Kim in the car, Khloe wonders if it’s okay to give Kim orange juice. Khloe finds that Kim is very pushy, Khloe admits that she only went to the adoption agency to get Kim off of her back. Khloe asks about the options in the adoption agency, about second thoughts of adopting and what not. Khloe once again admits something, that she’s not against adoption, but she’s worried because Lamar doesn’t know where he’s going to be playing basketball this year. Kim is confused with Khloe and doesn’t understand what she’s doing.

Khloe starts training Bernard on her own, Rob appears out of no where and starts asking Bernard to sit and to lay down; Bernard does both easily and Khloe questions if dogs can learn this so fast. Khloe believes she’s doing a great job with her dog, though she doesn’t know that Bruce is the one who’s training the dog properly for her. Rob arrives on his Vespa to meet with Kris, Rob isn’t wearing a helmet because he doesn’t like it. Though he ends up wearing it to make Kris happy, Kourtney arrives and says that Scotts’ Vespa is at the shop. Kris wants to bust Scott, because she believes “The motherfucker” is lying to her. Kris and her family drive on their Vespa’s to the place where Scott usually brings his cars too, they ask if Scott’s got any vehicles in the shop and they find a Porche. The mechanic tells the family that he’s meeting Scott for lunch, Kourtney has no idea how she can help Scott at this point and believes that he’s screwed. Kris Jenner arrives at the restaurant to meet up with Scott, Scott does not look pleased at all. Kris comes up and mentions the motor scooter, Scott says that he doesn’t like scooters. Scott ends up upsetting Kris, she is not pleased with Scott’s answer.

Khloe is at the dentist, Rob shows up for a little surprise visit; we find out that his real motive is that he’s checking how long Bruce has to train Khloe’s dog Bernard. Khloe is in the car with Rob, and Khloe mentions how Kim keeps mentioning how she should adopt a child, to at least think of it as an option. Khloe is going to the fertility doctor to find out more about her body.

Khloe shows up at Bruce’s place and mentions how she’s pissed off at him, Khloe found a collar that Bruce uses to train with the dog. Khloe isn’t happy with Bruce, going behind her back and training the dog. Khloe is asking why did Bruce decide to do it, he mentions that Khloe isn’t allowed to train her dog without her permission. Bruce apologizes to Khloe for training the dog on his own time and all is good between the both of them. Khloe begins singing in the car and it almost makes my ears bleed for this horrid screeching is something hard to bare with. Khloe arrives with Kourtney at the doctor to get her fertility checked. Khloe calls Lamar to let him know that he needs to show up at the doctors, Khloe is feeling weird with Lamar because Lamar said that he really needs to talk to Khloe about something. Khloe meets with the doctor, the doctor mentions that Khloe’s general health is fine, he then adds that the egg in her body wasn’t maturing at the time. Though Khloe might be different know, Khloe ends up getting checked. The doctor finds dark circles within her.

The dark circles are a good sign because they could contain an egg for her and it’s possible that she can become pregnant, but Khloe admits that she’s not at the moment in her life that she’s ready to get pregnant. Scott asks when Kylie’s birthday part is at, but then asks Khloe how can he make up with Kris. Scott ends up pouring a huge glass of wine for Kris, Scott mentions that he’s sorry and feels bad for selling the scooter. Kris mentions that she only wanted to create a family experience with the motor scooters, Scott asks if there’s anything he could do to makeup for it. Kris wants a scooter date with Scott alone, in order for his apology to fully be accepted. Khloe gets a call from Lamar, it doesn’t seem like she’s pleased with the call. Kylie asks if Lamar is going to be at her party, but Khloe doesn’t know. Lamar continues to call Khloe again and she picks up again, he mentions that there’s something important that he needs to talk about with Khloe. Khloe calls Lamar to ask what’s important, Lamar then asks what’s up? Khloe is confused with how Lamar is acting at the moment. Khloe hangs up and doesn’t looks happy at all, she finds that Lamar is a very depressed person; though she’s scared for Lamar because he’s in the moment at a deep low. Khloe keeps her problems with Lamar to herself and doesn’t want to mention anything about it.