Keeping Up With the Kardashians Recap 6/2/13: Season 8 Premiere “We’re Having A Baby!” 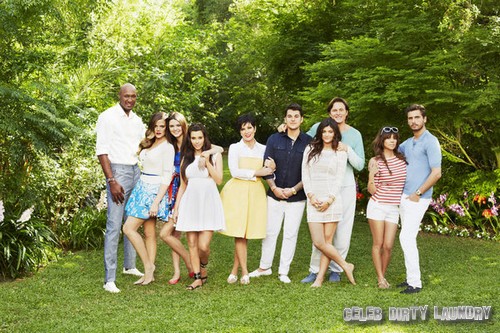 Tonight on E!  KEEPING UP WITH THE KARDASHIANS returns with the premiere of it’s eight season.  On tonight’s premiere episode called, “We’re Having A Baby!” the Kardashians continue to share their soaring highs and their crashing lows, with the same candor, strength and humor that have made this close-knit group one of the world’s most widely recognized families.

This season once again takes viewers inside the ever-evolving, unfiltered relationships of this close-knit, blended family. Kris, Bruce, Kourtney, Kim, Khloé, Rob, Kendall and Kylie are known for boisterously celebrating life’s golden moments and fiercely banding together when mishaps threaten their strong bonds. As their lives evolve, the always outspoken and unpredictable family are sticking together through all the laughs, cries and inevitable drama in between.

The Kardashian/Jenner brood includes a number of children and grandchildren, with a new array of dramatic and heartwarming moments at every turn. This season the family embraces change on several fronts, with younger sisters Kendall and Kylie growing up and striving for more independence from each other and the family; Bruce and his son Brody making an effort to spend more time together; Khloé facing startling feelings about Kendall and Kylie as they grow into young adults; Kourtney drawing a line in the sand with Scott when he wants to take their relationship to another level and the impending and anxiously awaited arrival of Kim’s first child.

On tonight’s premiere episode the family is overjoyed about Kim’s pregnancy, but Kim’s surprising behavior makes them wonder if she feels the same way. Bruce and Kris wonder if Bruce should get a space of his own and Scott tries to convince Kourtney to accept a backdoor deal.

RECAP: Kim announces that she is very pregnant and is still not divorced and has still not found a house to move into.

Kim and Kourtney are in New York on the Today Show and Kourtney makes a joke about one sister babysitting all the kids and breastfeeding them.

Kris encouraged Bruce to invite some of his friends over, after dinner Kris announces that she is going to bed; but first Bruce brings some guy up to their room who is a Real Estate agent to show off the upstairs.

Scott thinks Khloe and Lamar are into some weird sex stuff and he wants Kourtney to be in to the same stuff; backdooring.

Bruce and his friends are flying their helicopters in the house and Kris cannot believe the noise they are making when she is trying to sleep.

Khloe and Kim are in the truck driving around and stuck in traffic. Kim tells her that Chris keeps pushing back the deposition and she doesn’t know why. Kim is exhausted emotionally and doesn’t know what to do.

Scott and Kourtney are at home and he thinks she is a little less on the fence on the whole thing. The two are in the kitchen and use the fruit to discuss the whole back door thing. Scott is convinced they are going to get there.

Bruce calls Kris to dinner, but she is busy getting a message. Kris is finished her massage and tells Kris that he is just trying to push her buttons while she is trying to have quiet relax time. Kris suggests Bruce get himself a man cave.

Kim as the ultrasound with her mom, she asks the doctor about people eating placentas and then tells him that she really wants to do it.

Kylie and Kendall are out with Bruce to help him find his new man cave; he tells them that sometimes space is a good thing.

Kim is wearing high heels still and her sisters are not happy about. Scott is sending Kourtney text messages about backdooring her.

Bruce is still looking for his new place, but this time he brings his son Brandon and his wife along with Rob.

Kim and Kanye finally bought a house, but they plan on tearing it down. Khloe is concerned because it is so much work and won’t be ready in time for the baby. Khloe tells Kim that she is in store for a major wake up call and that she just doesn’t get it.

Kim is with her mom and tells her that she is so stressed and doesn’t want to see the rest of the family. Kris tells the family that they just need to be there for Kim no matter what.

Kris is alone at home, Bruce is off to his new place and she looks bored.

Kylie is driving with Kris who explains why Bruce found his own place. Kris is secretly concerned though that Bruce is spending so much time at his new place.

Kris and Kylie arrive at Bruce’s beach place and Kris has a lot to say about the mess. Bruce tells her that it is his place; meaning shut up. Kris tells Bruce to pack his things and come back to house for pizza. Bruce says it sounds like she misses him.

Kim is at her ultrasound again and her sisters are there to support her and find out the sex of the baby. Kim is 20 weeks pregnant and it is a girl, 99% sure.

Kris is all dressed up and it is just for Bruce; they are eating dinner and she cooked….. no I doubt it, she probably bought it and served it on her china. Anyway, the two seem happier.

Kim and Kourtney are going baby shopping now that she knows what she is having.

At Kim’s house, she finally feels like she is in a good place with her pregnancy.