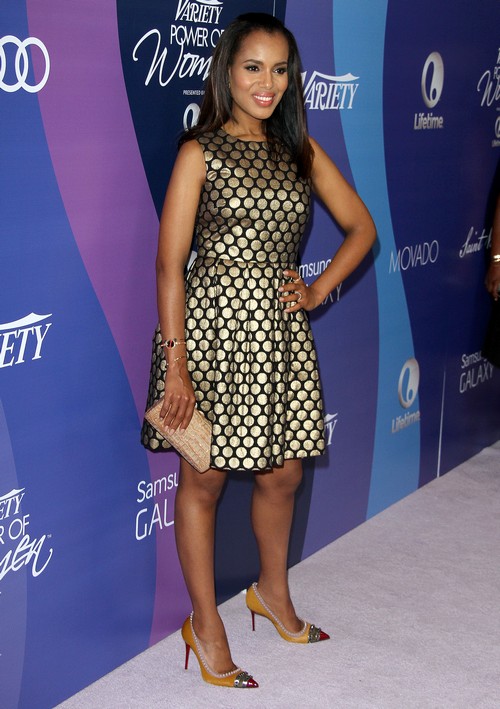 About a month ago Kerry Washington showed up for Scandal’s season 3 premiere party and it was pretty obvious to us that she was hiding a pretty big secret under her yards of flowing fabric. Kerry seems to gravitate towards body hugging clothing so when she deviated from that it kind of got my attention. Girlfriend has looked pregnant for a month now and sure enough, as of this morning US Weekly has confirmed that the actress is about 4 months along.

That’s not to say that Kerry is big by any means. Four months pregnant on her probably equals a size 2 in clothing. She married Nnamdi Asomugha last summer and now the timing makes me wonder if Kerry already knew that she was pregnant. If not then this pretty clearly is a honeymoon baby for the couple that has been together since June of 2012.

One huge question is how this baby news will affect Kerry’s lead role as Olivia Pope on Scandal. Her character cleans up dirty messes by Washington DC’s most elite and she also sidelines as the president’s mistress. Shonda Rimes could easily write a surprise pregnancy into the already griping storyline, spinning the characters off in crazy directions. Do you think that Olivia should also be pregnant and pulled between the two men that have been involved in her life or is that too predictable of a path to take? Will the show instead opt to hide Kerry’s belly and somehow shoot around her pregnancy> Which would you rather see happen? Tell us your thoughts in the comments below!