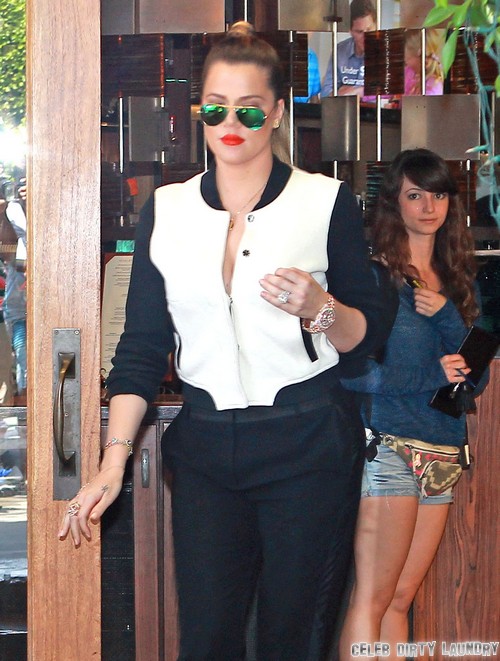 Not long after hearing that Khloe Kardashian has given up on saving her crackhead husband, Lamar Odom she is slowly but surely taking some real steps towards sliding back into her old life. While Khloe’s twitter still includes the last name Odom, she has dropped it from her official Instagram account. I guess it’s the first big step in separating herself from Lamar and all of his drama and it makes sense as it has been about 2 months since she last posted a photo of her husband on that account.

This looks like Khloe’s way of easing herself back into a solo life. Her friends say that she’s just not ready to file for divorce yet but is going to start taking little steps like this one. It’s interesting that the fans haven’t jumped all over this change yet. They seemed to really be pulling for a reconciliation of what was thought to be the strongest Kardashian couple. Instead Khloe is giving clear indications that things are most definitely going in the opposite direction. Let’s not forget that Kris Jenner has already retained top legal representation for Khloe to prepare the soon to be filed divorce.  Kris dragged Khloe along to see lawyers last week despite that fact her daughter was still uncertain she was absolutely done with Lamar – now the name change tells you that Khloe has made up her mind.

Do you think that there’s even a slight chance that Khloe would take Lamar back if he were to clean himself up? Wouldn’t it be a huge mistake to trust him again? Not that it really matters because as of now Lamar doesn’t seem to care very much about himself let alone his marriage. I think this was a first easy step for Khloe and when Odom disappears from her Twitter then we will really know that the divorce is a done deal – don’t you think? Is Khloe wise to finally begin to cut the cord? Tell us your thoughts in the comments below!