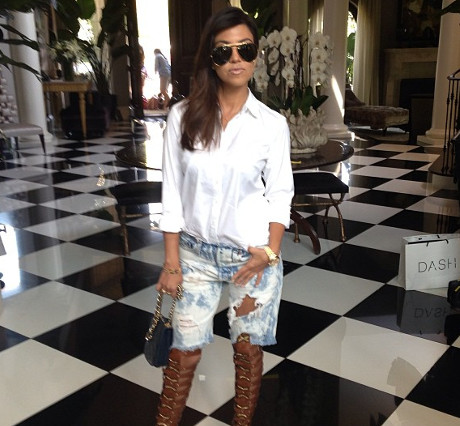 Well, you can’t say that Khloe Kardashian isn’t doing her best to keep her mind off Lamar Odom and her relationship troubles. Whether it’s to keep herself distracted or to keep the public distracted, Khloe has been tweeting inane and idiotic messages to her fans over the last week.

She tweeted a picture of Kourtney Kardashian wearing acid wash shorts with holes in them, knee-high gladiator heels, and a formal white shirt on top. The whole outfit looks like it was put together by a crackhead, but of course Khloe couldn’t just leave it there. After she uploaded the picture, she captioned it with, “So chic! So rich! So lesbian!” Lesbian? Really? Lesbians usually have way better taste than that, and it’s incredibly offensive to label that outfit ‘lesbian’ – it’s both stereotyping and derogatory.

Khloe later uploaded a video of her younger sister, Kylie Jenner, doing a weird dance that some have dubbed reverse twerking. The Keek video shows Kylie thrusting her hips forward instead of backwards, and moving her shoulders instead of her butt. While this wasn’t so offensive, I’m sure they were doing it as a jab towards Miley Cyrus and the whole ‘twerking’ craze that seems to have taken over the country.

All of this certainly seems like a ploy for Khloe to distract the media, especially when they’re so obsessed with her husband. There’s been no official updates on their relationship status, but this way she can get everyone to start talking about her sisters as opposed to her.

Nice try, Khloe. Nice try. What do you guys think about her tweets? Let us know your thoughts in the comments.

Sep 11, 2013 | This kid is awesome @KylieJenner by KhloeKardashian on Keek.com