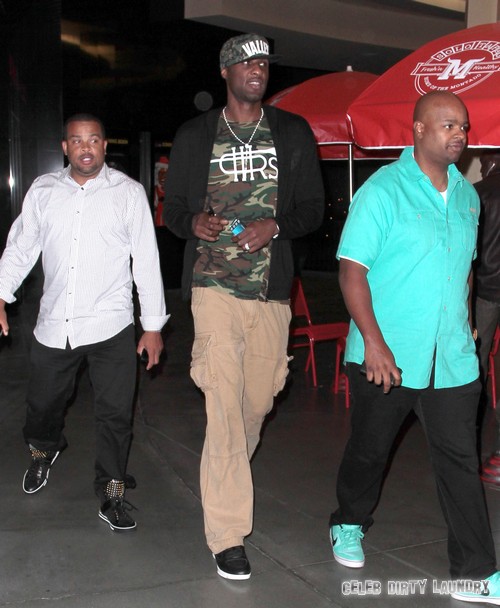 Oops he did it again.  Regardless of the fact that Khloe Kardashian let Lamar Odom back into her life it looks like Lamar is back to his old ways.  Wednesday night he was out getting sloppy drunk throwing back the champagne, cause boys just wanna have fun right?  He showed up at Beacher’s Madhouse in Hollywood with the boys and was knocking back the drinks one after the other.  When your wife turns a blind eye to your bad ways, what motivation do you have to change?

Khloe has no one to blame but herself, she is letting Lamar make a fool of her.  She let Lamar back into her life without him going to rehab or showing any indication he wanted to change. Sources claim Lamar has been, “Clean for weeks,” Kim Kardashian also claims to have never gotten any plastic surgery  Neither of these are true.

Lets face it, Lamar has substance abuse problems, he drinks too much, he drugs too much and he likes fast women and there is no indication any of that is going to change….

I am so tired of hearing and reading about Khloe’, “woe is me.” Khloe doesn’t care about any of this, she just wants to save her marriage and she wants Lamar back.  She knows if she tries to force Lamar to get the help he needs, he is going to be out of there stat and on to the next stripper.

As a matter of fact I contend that Khloe and Lamar would still be living in wedded bliss if the press had not cottoned on to what was happening.  If Lamar was drunk and stoned and kept it on the QT she would have tolerated it.  The only thing bothering Khloe right now is the fact Lamar’s dirty laundry is being aired in public.

Check out the photos of – Lamar Odom enjoying a night out at Inside Jokes LA on October 30, 2013 in Hollywood, California. Lamar, still hopeful to play in the NBA again this season, reportedly reunited with his estranged wife Khloe Kardashian at Kanye West’s recent concert in LA.