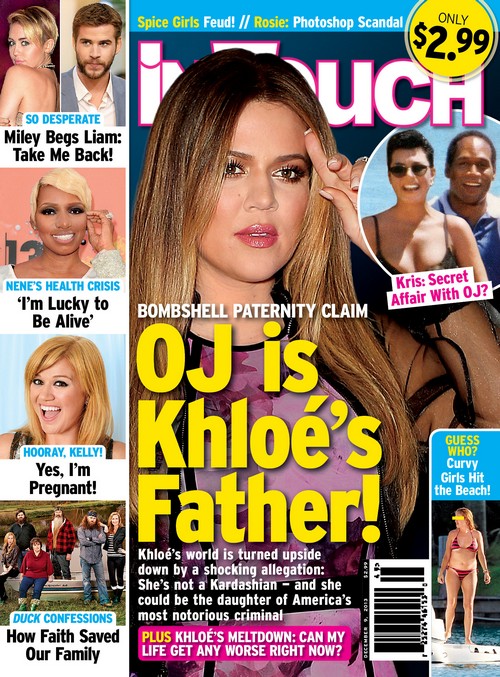 So, we’ve heard the claims before that Khloe Kardashian’s biological father was not Robert Kardashian and with a mother like Kris Jenner, well anyone else is certainly a possibility. Aside from striking financial gold by pimping out her family, Kris has consistently proven to be a drunken whore for the last few decades. Fidelity is not her strong suit according to Robert’s own diaries that were leaked several months ago and Khloe’s paternity has always been in question- even on their reality show. Girlfriend has toyed with the idea of taking a paternity test but always wimps out at the last minute, probably because she is afraid of the results.

According to the Dec. 9th print edition of In Touch there is now some proof that seems to point towards OJ Simpson as her bio dad. It was recently revealed that even back in the 1970’s Kris’ then-boyfriend suspected that she was hooking up with OJ so why would she let a little detail like him marrying her bestie, Nicole Brown Simpson, keep her out of his bed? As for Khloe, learning that you may carry the genes of one of the U.S’s most despised presumed killers in history, well that’s a pretty big blow to the girls already messed up life!

Miley Cyrus is grabbing headlines again after her AMA performance with a big hologram kitten, but do you think that she secretly still has Liam Hemsworth on her mind? According to In Touch’s inside scoop Miley is still trying to worm her way back into Liam’s heart (and bed). Do you think it’ll work or has he really moved on for good? Tell us your thoughts in the comments below!

Editor’s Note: I still think Khloe’s father is Alex Roldan, Kris’ hairdresser and one of her f**k buddies at the time Khloe was conceived – just look at the pics.  As Khloe ages she looks more and more like Alex.