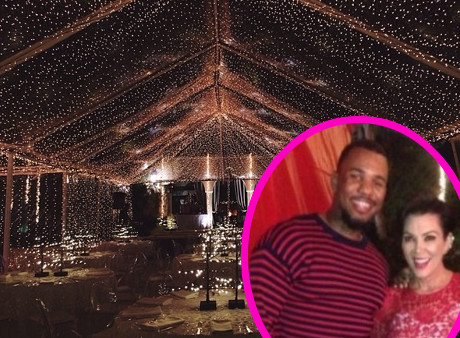 Not long after Khloe Kardashian officially filed for divorce from Lamar Odom, she was immediately connected to two new men, Matt Kemp and The Game. Well, as if the love triangle couldn’t get any more heated, both The Game and Matt were invited to Kris Jenner‘s Christmas Eve celebration Tuesday night. You know Kris, always looking out for her daughters — perhaps she was just trying to give her daughter ALL THE OPTIONS!

Both of Khloe’s potentials posed happily for photos; however, according to sources, it seems as if Matt spent the most time beside Khloe Kardashian while The Game was seen chatting with Kris and Kanye West. The Game also snapped a few photos with Kris (pictured above). So has Khloe chosen? Has she decided to leave The Game in the dust and start something up with Matt Kemp, a professional baseball player? After all, Khloe does have a thing for athletes.

Lamar Odom was not invited to the party. It was reported recently that he decided to spend the holidays with his daughter and son on the east coast. While some people thought he’d be getting back together with his ex, Liza Morales, the mother of his children, Liza has confirmed that any rumor of a reunion is quite ridiculous. She says she maintains a friendly relationship with Lamar for the sake of their children.

What do you think about Khloe’s future romantic prospects? It seems as if she chose at the Christmas Eve celebration . . . . But what will tomorrow bring? Will her famous heart soon desire another?