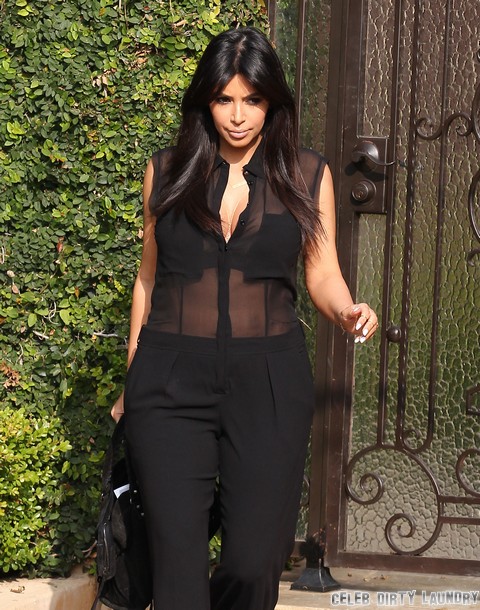 Kim Kardashian has found another way she can cash in on her pregnancy: launch a baby clothing collection. The reality star, who is set to give birth in June, has spoken to her momager Kris Jenner about the idea of starting a clothing line just for babies, which would then be sold exclusively through Sears under their Kardashian Kollection label.

The idea seems solid, but the thought of having a baby wear something with the name ‘Kardashian Kollection’ on it can be really disturbing, don’t you think? Jenner has supposedly already spoken to Sears about this idea and they seem “more than happy” with it, which could mean that the company could be producing Kim’s new clothing collection as soon as the summer and have it in stores early 2014, depending on what kind of things the 32-year old has planned.

RadarOnline reports that Kim and Kris couldn’t believe they didn’t come up with this idea earlier, seeing that they both love fashion, so it only made sense for them to try and have something in the works for their millions of fans. “Kris and Kim can’t believe they’ve never thought of this before, but they would love to produce baby clothes,” a source tells the site. “It clicked for Kim when she started looking at designer pieces for her own baby and saw nothing that really grabbed her and was cost effective.”

If their new clothing lines for babies ends up doing as well as the Kardashian Kollection – which is now being sold worldwide – Kris will try and snag another deal for maternity wear and accessories for toddlers and young children. So, in other words, Kris is looking to become a billionaire by the end of 2014 by the looks of it! Slow down. We know everything that the Kardashians release – whether it’s a new book or their makeup lines – it ends up becoming a phenomenon, but it does seem like Ms. Jenner is going a little overboard with all of these plans for baby and maternity wear just because Kim’s pregnant. Did she do this for Kourtney when she was preggers? Um.. No! There’s no doubt in our minds that Kim will get the biggest share from all of this. Poor Kourtney and Khloe.

“Kim discussed it with Kris who suggested they could even expand the Kardashian Kollection by including maternity clothes for young, expectant moms who want to stay fashionable throughout their pregnancy without spending a fortune on items they will likely only wear for a few months. Kris thinks this could be a goldmine, with baby clothes often being so expensive, their Sears range would make designer baby and pregnancy wear affordable for anybody,” the source says.

Expect a confirmation from Kris and Sears sometime during summer.