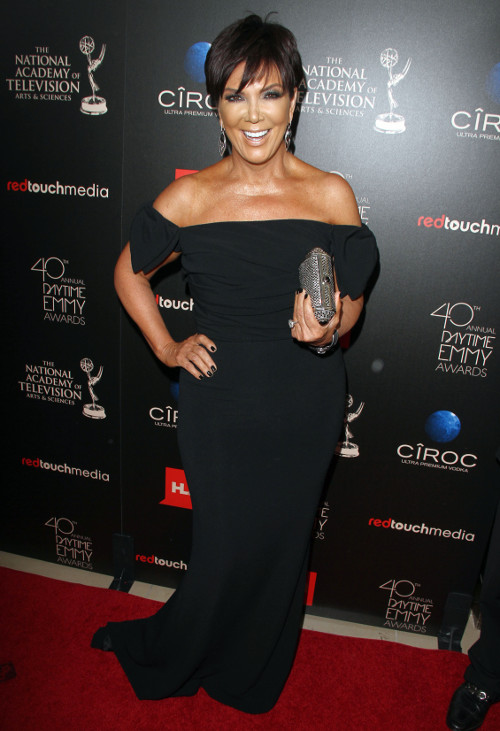 Kim Kardashian‘s new baby is going to be the most famous baby nugget in the world and, despite Kanye West‘s adamant desires to keep the baby out of the public’s eye for the time being, the fact of the matter is that a Kardashian baby is a public baby — whether they like it or not. Kris Jenner was recently spotted at the Daytime Emmy Awards, not long after Kim gave birth to her bundle of joy, and hinted at the possibilities of Kim’s baby making an extra special appearance on her new talk show.

While at the awards, she said to tune into her new talk show endeavor to get all the juicy information and news on the newest addition to the Kardashian family. A source gathered by Radar Online said:

“[she said to] tune into her new talk show to get all the inside scoop about Kim’s newborn baby. When someone asked Kris if the baby would make an appearance on the show, she demurely said ‘you will have to watch,’” an onlooker told Radar. “Kris was asked if she had any pictures of the baby, and she revealed she did, but didn’t want share with anyone. Kris was absolutely loving all of the attention she was getting, and was absolutely milking it.”

Kris has made a point to say that the baby is doing great and that Kim has been kind of quiet since the birth. Well, duh. She has to make us wait in anticipation for the name reveal! While no one has much of an idea about what the name will be, sources claim the name will undoubtedly begin with a K. And we’d expect nothing less.

This is the first baby for Kim and Kanye. While Mr. West doesn’t want his child to appear on the talk show — or any TV show for that matter — we have a feeling Grand Kris Jenner (AKA ruler of the known universe) will get what she asks for. What do you think about Kim & Kanye’s baby?