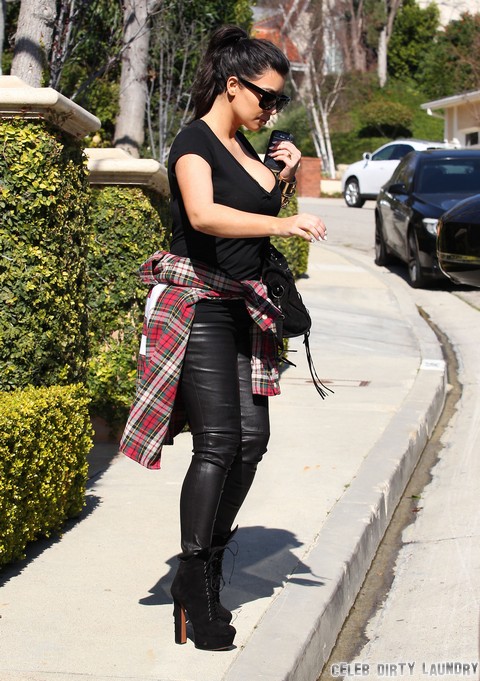 Kim Kardashian‘s breasts have grown three cup sizes bigger — and this time it wasn’t through any surgical enhancements. The 31-year old reality star, who is four months pregnant, has supposedly gone from a 36D to a 36G and though you’d think that Kim would be happy about this, she’s not. The busty starlet is furious, seeing that she can no longer fit into any of her designer clothes anymore and dress like the glamorous woman she likes to be in front of the cameras.

In recent weeks, we’ve seen Kim change her style to maternity wear, and that was simply because her boobs were becoming a so big, even Katy Perry couldn’t compete against those puppies. On top of that, her weight gain has become a massive problem for her too; she’s already worrying how she’ll end up losing the weight once she gives birth in June, which would explain why she has hired a personal trainer to help her burn the calories from her ice-cream cravings.

Is this normal? Well, you’d think that a pregnant woman would just take it easy and just enjoy being pregnant — go crazy on whatever you feel like eating, embrace your fuller body figure and get plenty of rest. But no, Kim Kardashian has to be different; she wants to fly around the world and cash in from every offer possible because she’s… Kim Kardashian – there’s no doubt in our mind that Kris Jenner is approving of Kim’s heavy work schedule during pregnancy because at the end of the day, momma Kris still makes her 10%.

Hollywood Life reports that Kim is frustrated and “a little upset because she can’t fit into her clothes as well. Kim loves her curves,” the source revealed. “But she’s upset that nothing in her wardrobe fits her any more.” This just goes to show how much Kim relies on her looks; not even having a baby could make her want to dress casually for a couple of months.

As previously stated, Kim is expected to give birth in June, and quite frankly, we don’t want to know what kind of anxiety attacks she is going to suffer from once she sees her body after welcoming her child. Something tells us she already has her plastic surgeon put on speed-dial in case of an “emergency” fix. Ha.

Watch out for a 2-hour E! special on Kim’s breasts coming to a home near you very, very soon.