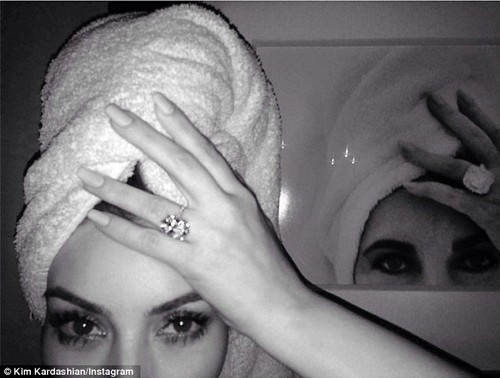 She’s done it again. Kim Kardashian has once again compared herself to Elizabeth Taylor. With her hair wrapped in a white towel and her engagement ring front and center, Kim recreated one of Elizabeth’s most iconic photographs and posted the black &white picture on Instagram. She simply captioned the snapshot, #myidol.

While Kanye West’s fianceé is beautiful and the resemblance to Taylor in the photo is uncanny, how she even have the audacity to compare herself to the legend? Elizabeth Taylor was a two-time Academy Award winning actress, fierce activist and humanitarian, and will forever be remembered as one of Hollywood’s greatest actresses. Kim Kardashian’s legacy? A sex tape, reality show star, and Kanye West’s baby mama. If you can think of something that equates her with Ms. Taylor , please feel free to leave a comment.

And this is not the first time Kim has done this. It is no secret that Elizabeth is one of her greatest inspirations. “Elizabeth Taylor is one of my all-time favorite Hollywood style icons. She epitomizes Hollywood glamour and beauty,” Kim wrote on her blog a few years ago. In 2012, Kim tweeted she was “channeling” the actress during a photoshoot for her fragrance, “True Reflections.” She also did a Cleopatra (one of Elizabeth’s most memorable roles) themed photo spread for Haper’s Bazaar in 2011.
She also had the chance to interview Liz for that issue of Bazaar. She talked to the star about beauty and glamour, her infamous jewelry collection, her many husbands, and even asked advice on how to be a queen.

In fact, Elizabeth’s last tweet before she passed away was promoting this interview. “My interview in Bazaar with Kim Kardashian came out!!!” The best advice she gave the reality star was, “Follow your passion, follow your heart, and the things you need will come.“

I guess she took that advice and It worked because Kanye and North soon came which, unfortunately, means she will always be relevant and have some amount of fame. What are your thoughts on Kim comparing herself to the legendary, iconic, Elizabeth Taylor?