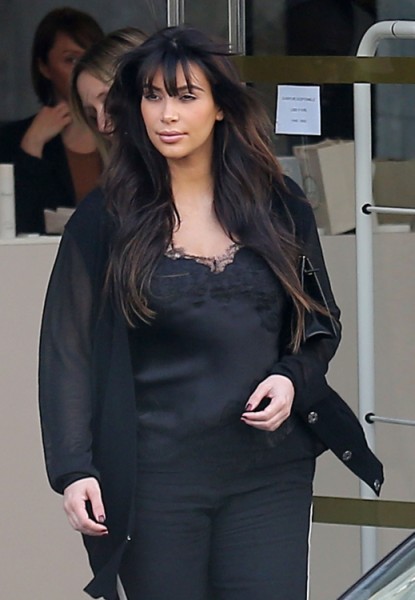 I know you all think Kim Kardashian’s stupidity and Kris Jenner’s greed have no limits but a fake pregnancy? Kim Kardashian loves empathy and attention but is she really capable of it? Haven’t we realized by now this woman is a terrible actress? I much prefer the stories that she’s getting fat on purpose to snag a Weight Watchers contract. That makes sense. That fits the Kardashian program. But a fake baby bump? I’m struggling. But let’s hear the National Enquirer’s sources out before we defend Kim in any way, shape or form. Apparently Kim is using a surrogate so she can give Kanye West the baby he wants while also gaining sympathy during the Kris Humphries divorce. Her defense of “Humphris is killing my baby with all his stress” has been effective so far.

“How convenient is it that Kim got pregnant just as she was making a mad push to wrap up her ongoing divorce from Kris Humphries?” the source said. “Now Kris is claiming the delay in grant­ing a divorce is stressing Kim and the unborn baby. A fake pregnancy cleans up a lot of problems all at once and gar­ners Kim sympathy. It also would be an insane coincidence that Kim just so happened to get pregnant soon after she learned the girlfriend of her ex-boyfriend Reggie Bush – Lilit Avagyan – is pregnant.”

Fine. But all of that could have been achieved while actually being pregnant. She didn’t need a surrogate so I don’t get the motive. I’ve mentioned before I think Kim inflates her bump for attention at times but I definitely think she’s pregnant. Her boobs and hips are out of control. The problem is she’s getting wider so her bump isn’t as pronounced. It’ll get there. Just you wait. The rest of her body is just filling out more at the moment which makes me think she’s having a girl. I’ve always heard that when you carry a boy it’s mostly just belly but when you carry a girl the weight goes everywhere. That sucks but now that we have the study that says women who have boys die earlier it all equals out in the end I guess.

Celeb Baby Laundry Tells Us Why Kim IS Pregnant For Sure! – CLICK HERE

I will say this for Kim though – her style is getting better. Check out the pics below of her in Paris with the baby daddy. She’s covering up more. She was in the fashion capital of the world and didn’t try to chic the hell out of us. That says something. Has Kim finally given up on using her pregnancy as a never-ending catwalk?  I’d like to say it’s true but I have a feeling she’s still got some shitty ensembles up her sleeve!

So are you down with the fake baby bump stories? Help me out. What’s the motive? Vanity? Kim is vain but is she really Adrienne Maloof?