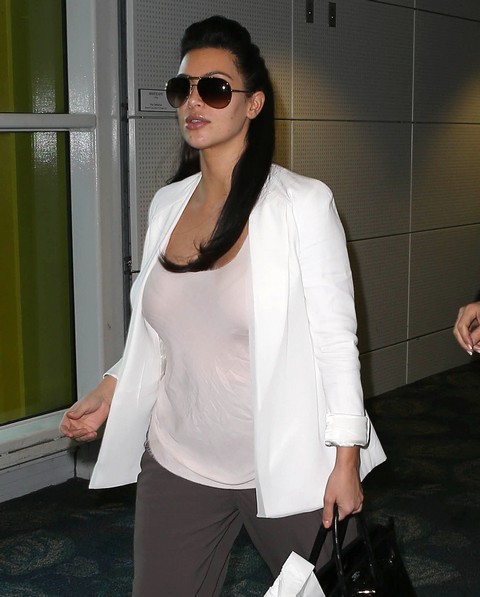 Kim Kardashian has been on baby bump watch since announcing her hook up with Kanye West, and since they confirmed a pregnancy last week, we can finally say with confidence that she is showing something more than a food baby after a big breakfast! Kim flew to Miami for a photo shoot (somehow, being photographed while pregnant is admirable and a characteristic of a hard worker—I’m skeptical about the authenticity of her work though!) in the sand. Airport photos show her in grey trousers, scoop neck tee, and cardigan with a tiny stomach bulge that we now know is baby Kimye!

Kim is at the end of her first trimester, which means she should start showing  a lot in the coming weeks. Rumor has it that first time moms expand more slowly than veteran moms, so she may be able to keep it hidden in flowy shirts for a while longer! While we’re thrilled to watch Kim’s transition from self-absorbed reality TV star to self-absorbed reality TV star with nanny team and baby, the news hasn’t done wonders for her family.

Khloe Kardashian, whose marriage to Lamar Odom is falling apart at the seams, has been struggling with infertility since 2009, and Kim’s unplanned pregnancy is causing her serious depression. Kris Jenner is still in a nasty divorce battle with Bruce Jenner, who is fighting for custody of their two underage daughters Kendall Jenner and Kylie Jenner. Kanye is now tied down to the Kardashians forever, and on the verge of losing his entire career. The only one who seems happy besides Kim is mother of two Kourtney Kardashian! Kourtney is, naturally, excited for her kids to have cousins to play with, and is pumping Kim full of baby advice. We’ve said it before—babies don’t fix everything! So don’t expect a fairytale ending for this story!