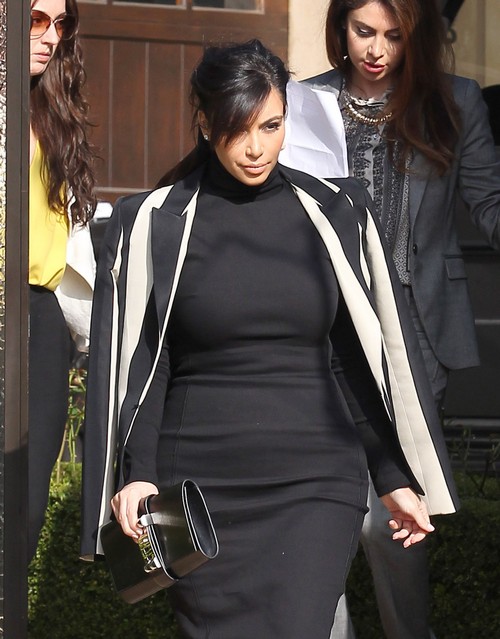 We all know that Kim Kardashian is only famous for a sex tape and her family’s exploiting themselves on television as reality whores. Well, we can also add to the list that Kim is a hypocrite, in a different way than you probably imagined.

Back in December during the awful Newtown tragedy at Sandy Hook Elementary School, Kardashian urged her twitter followers to sign a pledge to help combat gun violence. Yes, that is a good message to send to her many followers. Then this week comes and it seems like its back to the old hypocritical Kardashian that we love to hate on. So what did she do you ask? Well, she tweeted out a picture to her fans of a jewel encrusted handgun this past Saturday. It seems as if Kardashian completely forgot in her teeny tiny pea brain about the pledge she had just signed weeks earlier.

Well someone in Kim’s entourage must have let her know of her bigoted ways and the image was quickly taken down and you know that it wasn’t in someone in Kim’s immediate family because they aren’t the brightest bulbs in the box. Before the image was taken down there was plenty of backlash from her followers, ‘@KimKardashian you were “devasted” about the tragedy in Newton but to show us a gun with diamonds its swaaag???” While another put their two cents into the debate writing: ‘@KimKardashian U wld post a diamond studded, gold & platinum gun w/ ALL these issues about gun violence?? Stick 2 taking pics, boo #CLUELESS.’

While I believe that everyone is entitled to their own opinion of gun ownership, it’s another thing to be in the public eye and a complete hypocrite. Kim Kardashian is someone that doesn’t deserve to be in the public eye for her sheer acts of stupidity. Unfortunately for us, we are stuck with this twat for awhile now that she’s pregnant with another famewhore’s baby.