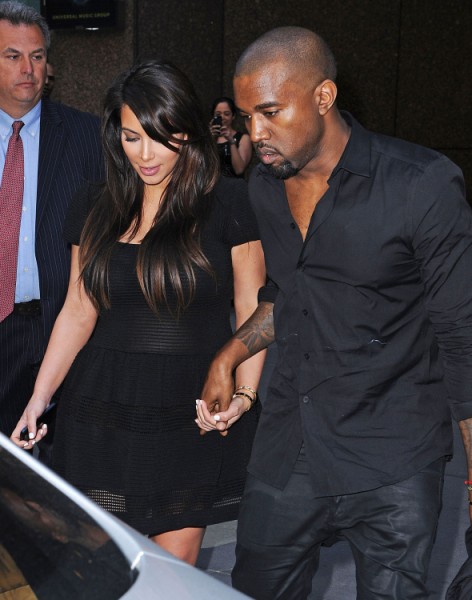 Kris Jenner would be so proud because a family that sells out together truly does stay together!

Yesterday Kanye West tweeted a cryptic message involving a lone date on his twitter account – June Eighteenth. Well, that got many of us in a tizzy. What could it possibly mean??! Is it a wedding date? Is it the day the baby is due? Or is it just the release date of his new album or the (most likely ill-fated) clothing line he’s been ignoring Kim Kardashian for while in Paris all this time? There’s so much going on!!

Unfortunately, all roads seem to lead to the fashion line. Kanye’s British design partner Katie Eary is to show on June 18th at London Fashion Week’s Menswear viewing. But we can’t rule out a birth, can we? Why can’t Kanye have two babies that day? The timing is right for both especially if Kim is truly lying about her due date like a lot of us still think. She DOES NOT look seven months pregnant to me. Just saying….

But regardless of the date, doesn’t it seem like Kanye is using the ambiguity to sell his shit? You can’t tell me he didn’t know that people like me would stop and read something on his tweet because it’s so mysteriously close to the alleged due date. So… is he a hypocrite? Is he taking in some pointers from Kris? Why not use one baby to sell the other? It’s good business! But I thought Kanye didn’t want his baby to be a part of the machine. I thought Kanye was fighting the Kardashians to keep his unborn as innocent as possible. Does this leave a bad taste in your mouth or is it just a result of timing? Kanye can’t help the fact that he has a few things dropping at one time. But I just can’t shake this nagging feeling that that little baby doesn’t have a chance in hell.

Is Kim Kardashian using the baby’s birth to promote other business ventures? She used it to get divorced after all! Is the Kanye West album June 18 or could his tweet be signaling Kim’s planned c-section? Oh come on! You know she’s going to have one. There’s nothing natural about that woman.