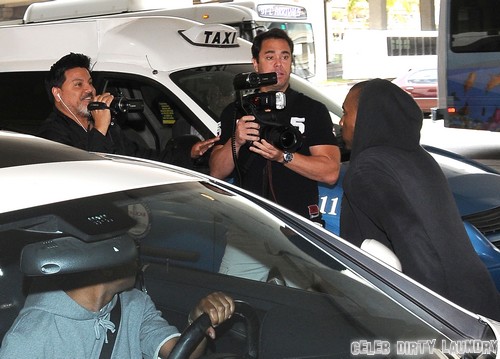 Finally, after 8 weeks of hiding out Kim Kardashian emerged from Kanye West’s enforced lock down to take her baby girl to the pediatrician. Now how on earth did the press know that little North West had a doctor’s appointment and figure out which parking garage to hide out in? Well, that is exactly the question that Kanye was asking after photos of the couple with a nanny carting their precious bundle popped up online yesterday.

Kim and her attention hungry family have a habit of selling stories to the press and letting the paps know where they’ll be in advance to guarantee a photo opportunity is taken full advantage of. Kanye is positive (and likely correct) that Kim or her momager, Kris Jenner tipped off the paps and he has been fuming ever since. We have seen this hot head freak out in public on numerous occasions, can you even imagine how bad it is when he is behind closed doors?

Kanye has made it perfectly clear that his daughter is off limits and being born to famous parents doesn’t make her fair game in his mind. Kim on the other hand has lived every minute of the past 5 years of her life on camera and she is dying a slow death while on lock down. Not only does she want to see her daughter’s photos on the cover of major magazines but she also could use the cash flow.

Don’t forget while gaining 70 pounds over her pregnancy Kim barely worked and so she has far less money in the bank than she would have had she not had a child. Kim is used to raking in the bucks and doesn’t understand why Kanye doesn’t want to strike while the iron is hot and make some money off of their princess. How long before this relationship turns ugly enough to make Kim’s court battle with Kris Humphries look like a walk in the park? Tell us your thoughts in the comments below!