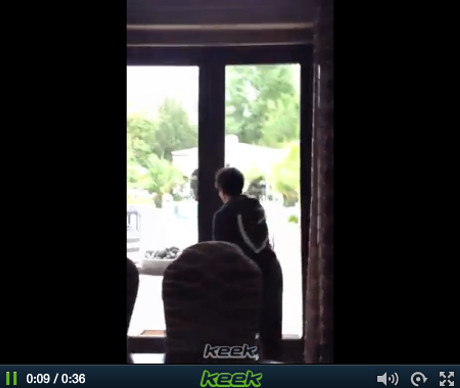 Kim Kardashian recently posted a video on her Keek account of Kris Jenner chasing after a gate-crashing paparazzo supposedly seeking first glimpses of baby North West. The only problem? Well, the entire documentation seems a bit shady, just a tad sketchy. The video begins with Kim Kardashian readying her phone — in the perfect moment — and her whispering, “Okay, there’s a paparazzo who’s snuck into our gated community and . . .  wait, Julian, take the phone, I don’t want to go out there.”

The initial statement made by Kim Kardashian sounds very scripted. Her tone conveys few nerves. Instead of rushing to check on Baby North West, she passes the camera off — as if filming the alleged intruder is the most important thing under the sun.

With Kim’s camera in the hands of someone else, we follow a comically frantic Kris Jenner out into the backyard and just before we actually get anywhere the video stops at 36 seconds — leaving the mysterious intruder undocumented! Another wonderful thing about this video: The camera’s pointed down at the ground the entire time. Awesome.

Now, we’re not positive of anything, because we weren’t there. But doesn’t this entire situation seem like another Kardashian publicity scam? They’ve been generating so much ridiculosity surrounding this baby. They better simmer down because when they finally decide to release the actual baby photos, the energy might not be as enthusiastic as they’d once hoped. They’ve done an impressive job dragging this thing out for as long as they can, but you can only drag something out for so long before anticipation melts into “eh, who cares anymore?”

What do you think about this craziness? Let us know your thoughts in the comments section below!