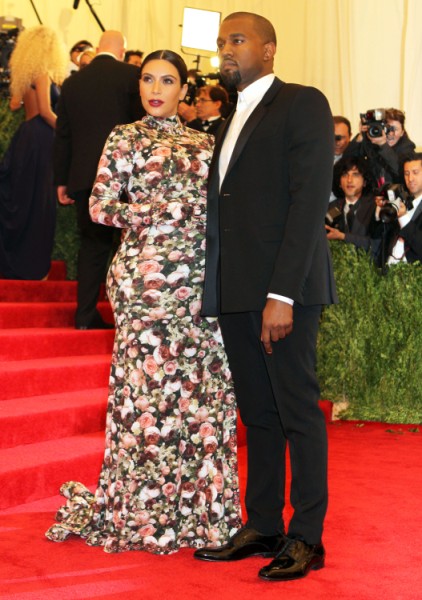 I’ll be honest. It took a few minutes of me searching for her hands before I realized she was wearing a glove dress. Is that what you would call it? I would just call it god awful but it’s the Met Gala. Kim Kardashian was going to screw up regardless of what she wore because the woman has the worst fashion sense in the world. But was it most horrible outfit of the night? Some were pretty bad but she might have won on this one if for the only reason that it’s not remotely punk. Since when are flowers punk? I know she was trying to appear slimmer by wearing a busy fabric but since when are FLOWERS PUNK?

What’s funny is that it’s sort of her own creation. According to the tabs this Givenchy gown was her second choice because she couldn’t fit in the original dress and she added the sleeves at the last minute because her stylist said her arms looked too fat. Kanye West was pissed about this because he was annoyed she was messing with art. Well, Kim’s a fashionista now so she can do those things, right?

Anyway, maybe Kim wasn’t feeling so great about herself after she walked the red carpet because when she got inside and Kanye had to perform he serenaded her. In a new video he’s heard singing, “Let nobody bring you down, you’re so awesome.” This is confirmed by Coco  Rocha who tweeted afterward: “Kayne telling Kim not to worry what anyone says that she’s awesome. Quite touching really #metgala.”

If Anna Wintour bans Kim again next year it will have nothing to do with her dress. It will be because Kanye tried to make this whole event about her. We get it. You’re PREGNANT! We get it. You’re HUGE. But come the ef on! It’s not the end of the world. Stop bitching about your critics. Just hire a better stylist. It’s just so obvious she can’t handle all the criticism yet she still trusts her own (or her stylist’s) judgement. Ugh. She’s a lost cause.

Did Kanye West serenade Kim because she was feeling not so fresh about her met gala debut? I don’t want to admit it but Kanye can be sweet sometimes… but did he piss off Wintour by making Kim the star and the talk of the night?