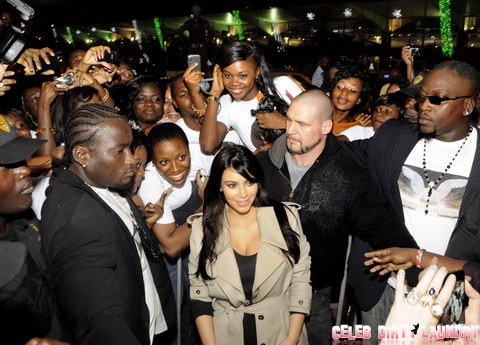 Most doctors would advise expecting mothers to eat well, exercise moderately, and get plenty of sleep—but Kim Kardashian refuses to cut back on work, even for the health of her baby! The pregnant reality star will do anything to make a buck, including international tours and exhausting photo shoots. Yesterday, Kim arrived in Abidjan, capital of the Ivory Coast in Africa.

She’s there for two days, during which she’s got a photo shoot, and two private parties to attend. Really crucial work, huh? Well Kim apparently isn’t eager to change her out-all-night lifestyle, and so designated 20 hours for the international flights that would get her to the party in time.

Since she’s landed, Kim has shared a photo of an antelope, which she claims are really friendly (and disease ridden?) , and has tweeted, “In Africa, doing a Tracy Anderson dvd in my lingerie bc I forgot workout clothes! @jOYCEBONELLi thinks I’m nuts! LOL” Of all things, this seems to be the most condemning.

Is it really impossible for one of her many handlers to run to the hotel gift shop and pick up a souvenir t-shirt and shorts? I mean, this girl has unlimited international texting and wi-fi, but can’t get her hands on yoga pants? It’s just another installment of “how sexy and over-the-top can Kim Kardashian be,” and we think it’s disgusting! Any chance to be naked, huh?

If Kim and Kanye West are serious about having a healthy baby, they’ll need to retool the foundation of their lifestyle. While I’m sure national travel will be safe, the stress of time zones and mandatory parties (which you know don’t end at 10pm) won’t do anything good for her body! You don’t see Kate Middleton jetting around the world, and she has legitimate reason to—her husband is a Prince, and has dozens of countries to visit during goodwill tours! We think it’s pretty disgusting that Kim is more focused on her celebrity status than on her baby!

Check Out Photos Of Kimster In Africa – Click Here