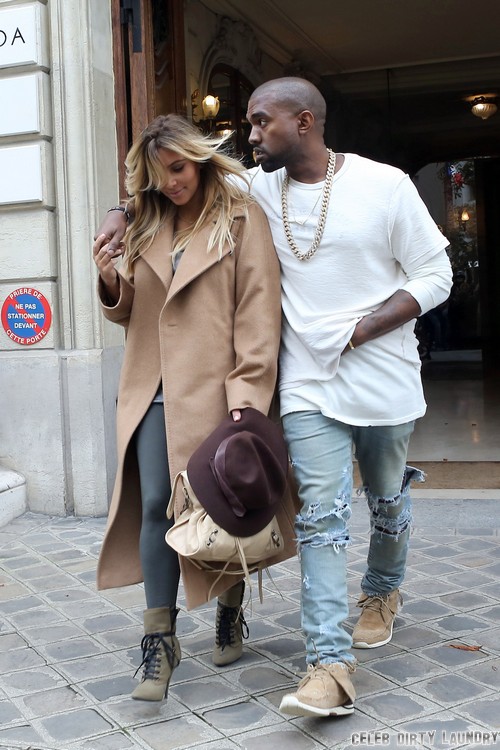 Kim Kardashian was spotted tagging along with Kanye West on his trip to Paris, but she seemed very intent on covering herself up in the pictures. Is there a reason Kanye went ape-shit on the paparazzi again, or is it just because that’s Kanye’s default setting?

It’s definitely interesting that Kim was so intent on covering every inch of herself up for the paparazzi because she actually made a public outing a couple of days ago. However, sources have been hinting at Kim getting even more plastic surgery, including a possible lip injection and more liposuction.

See, this is what reality television does to you. It makes you crazy. Kim was always an attractive woman to begin with, but the media attention and famewhorism has driven her crazy. She’s gone from normal looking to having a face that literally looks like it was molded from plastic. Her entire face has been practically re-done, from lip injections, nose job, and botox to liposuction and who knows what else.

There are also rumors that Kim and Kanye are actually going to Paris a few days early to get some more liposuction for Kim. Apparently, they don’t want to get any procedure done in Los Angeles because of privacy reasons – Kim would never be able to go to the plastic surgeon’s office without being pictured by the paparazzi. They’ll have more privacy in Paris, and they’ll be able to get any procedure they want without ‘sources’ leaking it to the tabloids.

What do you guys think? Is Kim traveling to Paris to get more plastic surgery? Let us know your thoughts in the comments.

Kim Kardashian arrives in Paris, France with her polarizing boyfriend Kanye West where they visit the Givenchy building before heading to the Eurostar station on September 28th