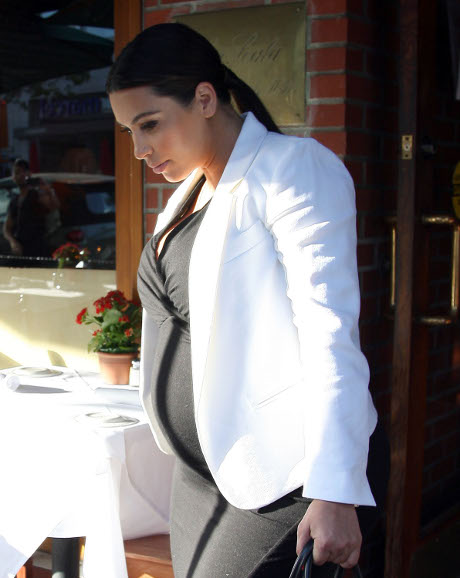 Oh, I see a future E! Television special in the making! Apparently Kim Kardashian has already hired a top photographer to document every second of her delivery right through her first week of motherhood. You and I both know that Kim doesn’t take photos to frame them around her home or to make fabulous albums with. These will no doubt be sold to the highest bidder. According to the June 3rd print edition of National Enquirer the photographer is just one of many pieces to Kim’s extravagant birth plan.

Most moms just want to make it through the delivery in one piece but already Kim is demanding thousands of dollars worth of white roses in her birthing suite and rather than wear a hospital gown she bought special lingerie for the occasion!

Baby daddy Kanye West has been very vocal about wanting to keep things quiet as far as the baby goes. He tries to lead a pretty private life which is a stark contrast to Kim’s filming every second and creating BS drama for a film crew to capture. Do you think he’s going to want every intimate moment intruded on by cameras and a reality television film crew? I’m betting no.

I see Kanye walking into the nursery and finding a film crew and flipping out on them. We’ve already seen him in action on numerous occasions. While Kim is ready and willing to exploit their child if the price is right I’m pretty positive Kanye will be precisely the opposite. I think their clashes on how to raise the baby are going to lead some epic battles. Am I the only one that can see Kanye going after custody of the baby? Tell us your thoughts in the comments below!