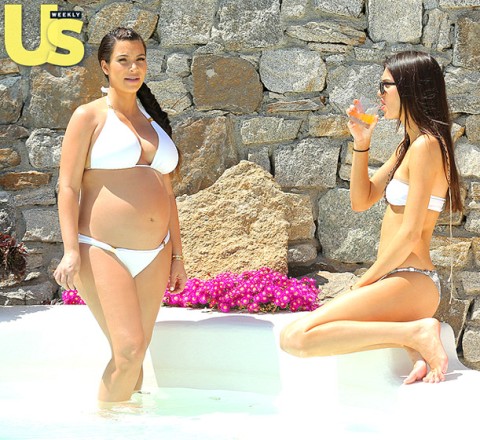 I got to see all the photos in all their glory this morning. Ugh. That doesn’t look like a women super stoked to be getting her pic taken while seven months pregnant. Kim Kardashian couldn’t have been the mastermind behind them (I doubt she’s ever the mastermind behind anything) because you can just tell her self-esteem is low. Kanye’s basically said it. Sources are saying it and even she’s saying it now. Kim told Grazia magazine in a new interview that at this point she’s basically wearing anything that will fit and that she hasn’t been able to keep her confidence up against the negative energy. And, let’s face it, there’s been a whole lot of negative energy.

So what gives? Why did she bust out the belly for all to see? Because Mama Kris Jenner told her to that’s why. Apparently, Kris has her eyes on a Weight Watchers deal similar to Jessica Simpson’s and is trying to make Kim look as pathetic as possible. I’d say it’s working. The only problem is that Kim’s not entirely on board.

A source told Closer magazine, “‘Kim is worried about having to drop at least three stone in seven months. She finds it hard to lose weight and knows, once she’s had the baby, she’ll be too shattered to fully focus on diet and exercise.”

At least she’s honest, right? She doesn’t just want to fake through it like Jessica. But who thinks a Kim Kardashian/Weight Watchers partnership will collapse just because Kim isn’t on board? I doubt Kris even needs Kim’s approval at this point. She’s probably got her signature down. If Kris could make the Kim Kardashian pregnant bikini pics happen then this will be a walk in the park.