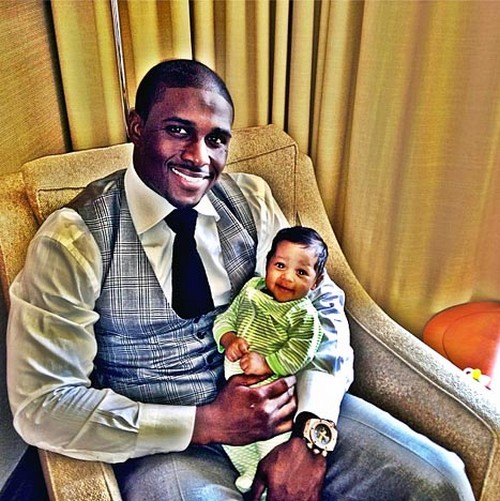 Reggie Bush and Kim Kardashian have a long and complicated history, and it’s interesting to see the evolution of their relationship after their breakup. They both seem to have become more mature, and are in respective long-term relationships with different partners – Reggie with a woman named Lilit Avagyan, and Kim with Kanye West. However, we can’t help but wonder how much resentment is left over from their relationship together. Although Reggie has always claimed that he’s happy for Kim’s success, she’s never mentioned the same about him.

So what’s Reggie’s reaction? Well, there have been plenty of reports that Reggie and Kim have been in touch over the births of their respective daughters. But is Reggie trying to steal Kim’s thunder?

Although we’ve yet to see a picture of Kim’s baby [no doubt waiting for some magazine to offer 7 figures], Reggie showed off his daughter in an Instagram photo for Father’s day. He captioned the picture, “Enjoying my first Father’s Day with my family! #blessed.”

But you know what’s more interesting? The timing of this picture. Reggie’s daughter was born a while ago, so why did Reggie wait until one day after Kim’s daughter was born before posting a picture of her? Bush also recently commented on Kim, saying, “I always wish her well. Always.” But then, why would he be trying to capitalize on the attention from Kim’s birth? I guess he could still wish her well, and at the same time, try to take advantage of her fame. It just seems insincere, but then again, he did date Kim Kardashian for quite some time. I’m sure he picked up a few tricks, if nothing else.