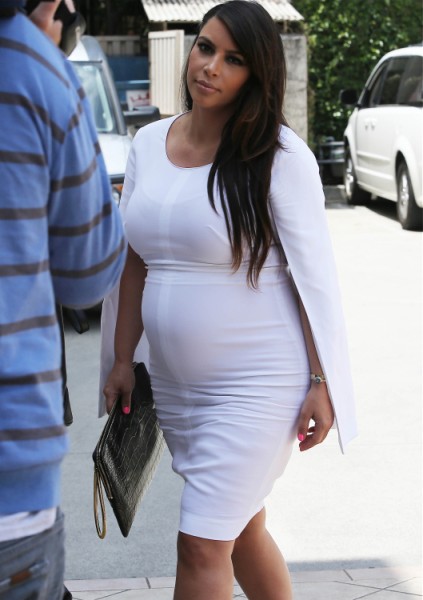 Those Armenian genes must be strong, no?

Reports keep trickling in about Kim Kardashian’s daughter and it seems we’ve got a mini-me on our hands. According to E! News a source said the little girl has black hair and looks just like Kim. She weighed in at under five pounds but still has no name although it is understood that it will begin with a K. Of course.

So… how sure are we that it’s Kanye West’s baby? Just kidding! He was there, wasn’t her? The media is shitting itself to slap the new father on the back for actually showing up for the birth. My, how our standards are lowering.

But let’s get back to those conspiracy theories we started yesterday. Until I see a pic of that kid I still think the “premie” story is nonsense. Kim got her c-section mid-June as expected. You can’t get more mid-June than June 15. We heard other stories about how she had an infection so she had to buck the whole planned c-section thing and go all natural. These reports make NO SENSE to me. Why all of a sudden would she opt to go natural when, as the Daily News said yesterday, she planned a C-section all along? And what kind of an infection makes you deliver five weeks early? And why didn’t the doctors stop the delivery? They have ways to do that. Having a baby that early is not ideal AT ALL. There are medications the doctors could have tried to keep that baby in there. Maybe they tried and it didn’t take. Maybe Kanye’s newest cheating scandal was too much. I don’t  know…. All I do know is that something smells fishy and it ain’t that mystery infection.

Are you anxious to see the mini-me? Kim Kardashian got everything she wanted on this one, no? The woman who hated being pregnant got to get out of the job early before, many will argue, those last five weeks of hell of real swelling and weight gain begin. She had a pretty quick, natural birth and the baby looks nothing like Kanye West. I’ve said it once before and I’ll say it again. Kris Jenner is a genius. She masterminded all this perfectly!