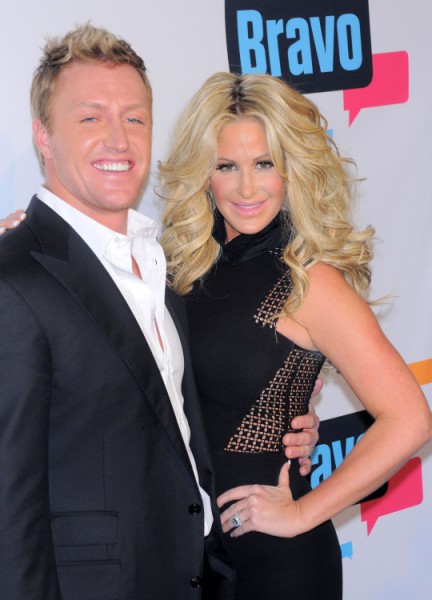 Bravo writers couldn’t write this stuff up if they tried!

Oh, Kim Zolciak. Fights and wigs were so boring before you came along! I’m just going to give you the facts and we can decide what to believe after. Apparently Kim almost threw down with a woman on a flight to New York earlier this week. The woman mistakenly believed Kim was having sex with Kroy Biermann in the plane bathroom and made a play to get in on the action. Kim told Page Six she always has Kroy hold the bathroom door closed for her when she uses plane facilities because she’s claustrophobic. When Kim was done using the restroom she bumped into the woman who had joined them outside the bathroom doors. The woman gave Kim a funny look and preceded to wink and flirt with Kroy seemingly inviting herself in on the hanky panky. Kim said her husband had to restrain her in her seat from going after the forward opportunist.

I hope I explained that clearly enough. The facts got a little weird  So do we believe Kim Zolciak/Mile High Club shunner or was she really trying to get busy with her husband and merely got caught? I’m confused. I can’t tell if Kroy was in the bathroom with her or not. Those aren’t the two smallest people. How does that even work? If he went inside with her then I could easily understand the woman jumping to that conclusion. If he was holding the door closed or standing watch from the outside then I don’t get this story at all. Why would a dude standing outside a bathroom door alert you for an airplane threesome? This whole story is full of odd behavior and it wasn’t even staged for the cameras which makes the whole thing even more bizarre. How do people get themselves in these situations? I know Kim Zolciak isn’t the sharpest blade in the drawer but god damn!