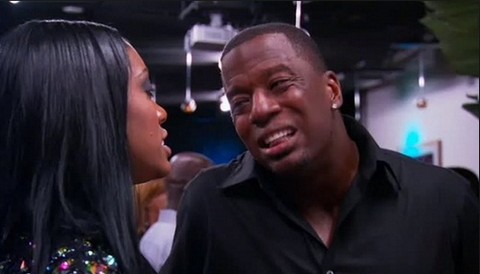 When Porsha Williams introduces herself in the opening of The Real Housewives of Atlanta she references her perfect life. If she’s going to stay with the show for another season she’s really going to have to change that because her life just got messy and underneath the mess is some real ugly stuff just waiting to come out. Like the way that she and Kordell Stewart met in 2009, while he was still with ex-girlfriend, Tania Richardson.

Porsha began her relationship with Kordell as his side dish, but we generally just sweep that under the rug and don’t mention it. Back in 2008 Tania actually appeared on RHOA as one of Sheree Wilson’s best girlfriends. Producers wanted to make her a fixture on the show but Kordell put his foot down and Tania obeyed. She nixed a reality TV career in favor of pacifying her man and it’s a real shame that he had to go and mess everything up by screwing Porsha.

Tania walked and Porsha and Kordell later married in 2011. He molded her nicely, I have to say. Tania had a career and Kordell’s baby so she was living her own life, but Porsha, well she was easy to control. She was like Cinderella hanging at the mansion, scrubbing toilets all day and making sure that dinner was ready when Kordell strolled in. It was great until RHOA came a-calling. He allowed Porsha to do the show but absolutely hated the outcome. His wife got a taste of the lifestyle that C-List celebrity brought her and she wanted more. When Kordell said no way to a second season Porsha is rumored to have been negotiating behind his back. At that point he realized he was now married to a fame whore, living her life for the camera. Obviously her press was hugely important and that’s probably why Porsha found out about her divorce from the media. It was an awesome move of hate and disgust on his part and I’m betting that Kordell made his point crystal clear.

Ironically, Kordell is now leaning heavily on Tania, the woman that he betrayed in the first place. The chick that stood by him and acted as the perfect beard when all of the NFL insinuated that he was gay, by refusing to say that he wasn’t. Tania has kept his secrets and helped him in the past. Now he looks at Porsha and fears that she will sell her soul and every deep dark secret that she knows to the highest bidding tabloid. Can you blame him? Tell us your thoughts in the comments below!