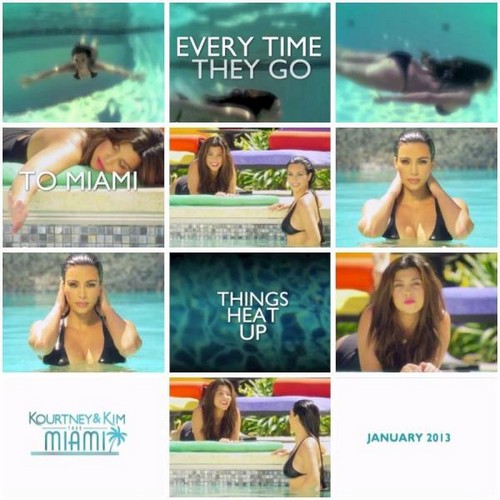 Tonight on E! KOURTNEY AND KIM TAKES MIAMI returns with a whole new episode called, “See Ya Later, Alligator.”  On tonight’s show Scott hunts for alligators in the swamps of Florida; at the same time, Kim spends her savings on her love of fashion; and Kourtney shows off her post-baby body wearing a bikini for a photo shoot..  Did you watch the last episode? We did and we recapped it for you!

On last week’s show for Kourtney & Kim keeping up is never enough, but Sunday it was Khloe’s turn in the spotlight and the glare was starting to burn.  Khloe was hosting The X Factor and sisters Kourtney and Kim were watching and they were horrified because you could see Khloe’s nipple though her top.  Khloe was stressed out of her mind and felt like she was letting everyone down.  Khloe started to question whether maybe she bit off more than she cold chew.

On tonight’s show after being named worst-dressed, Kim goes on a footwear shopping frenzy!  Kim is afraid she is ruining Kanye West’s image.  But will her crazy, never-ending spending spree leave her broke?  Kourtney is really concerned because she feels Kim is going overboard.  Kourtney has come up with a way to calm Kim down, she realizes if she tells Kim she likes something, Kim won’t take the item.  Her method seems to work.

Tonight’s episode is going to be another drama packed one, which you won’t want to miss. So be sure to tune in for our live coverage of E!’s Kourtney and Kim Take Miami Season 3 episode 10— tonight at 9PM EST!  While you wait for our recap, hit the comments and let us know how excited you are about the new episode of KKTM tonight and check out the sneak peek video below of tonight’s episode below!

Kim takes Scott and Kourtney into the bathroom to show them the excess skin when a blow dryer is placed on her hand.
Scott has breakfast with his friends. He talks about being introduced to Vienna, a reality TV star. She got in contact with him and wants Scott to come out to her farm. Kourtney can’t believe he wants to hunt an alligator. Scott meets Vienna’s family who he thinks are a different breed of people. He doesn’t have high hopes about the hunt later. Scott wants gator skinned loafers. Scott isn’t sure what he’s getting himself into. He says that hunting scares him less than this family. Scott proudly declares that “The Lord” is now in the Swamp Land.

Kim is still looking for a house in L.A. Her dream house is in a gated community in L.A. However, while browsing on the internet, she reads that she is on the worst dressed list. She feels bad that Kanye gets a bad rep for not dressing her well.

Kim says that she and Kanye decided that they can’t go more than 5 days without seeing each other. Kim says she feels bad when she wears something bad because they blame Kanye. Kim worries she is ruining his fashion reputation. Kourtney thinks Kim is missing ut on life because she spends so much time preoccupied with fashion, etc. Kourtney says Kim’s priorities make Kanye a perfect match for her. Kim says she has to go on a major fashion spree now that she has been on the worst dressed list. Kourtney thinks Kim is going way above what she should be spending lately when it comes to fashion.

‎
Scott says that shooting the alligator behind the eye was the humane way to kill it. After killing the alligator, they have to go to the local skinner. Scott partakes in the skinning. Scott says if you eat what you hunt, it’s no nearly as inhumane. Scott says he’d probably rather eat chicken nuggets but gator nuggets aren’t too bad.

Kim complains about a jacket that she wanted but wasn’t able to get. Kourtney says Kim is a shopaholic. Kim says that shopping online is one of life’s greatest pleasures. Kim says if she doesn’t dress a certain way, she will be talked about. Kim says Kourtney is judgmental and doesn’t get that dressing chic is part of her job. Kourtney accidentally deletes all the items in Kim’s shopping chart.

Kim continues to show Kourtney and now Khloe dresses. Kourtney says that Kim is a perfectionist but fashion is subjective.

Kourtney tries on bikini’s for Khloe to judge as she is about to do a photo shoot. Kourtney is not excited to wear a bikini because she is so flabby. She did a photoshoot three months after her first pregnancy but this time, it’s six months and it’s very frustrating.

Kim’s financial advisor, Elizabeth, says that she won’t have enough money to get her house if she keeps on spending at the rate she is.

Kim undergoes a tan. Kim believes being tan allows you to feel your skinniest. Kim is happy because she’s dark again. Mason doesn’t approve of Kim’s new look. Kourtney is frustrated because her weight hasn’t changed; she has to eat because she’s breast feeding and she won’t spray. Kim tells Kourtney about her financial issues. Kourtney says Kim needs to figure out what is important in life.

Scott brings Mason back a toy alligator. He tells the Kardashian sisters how he killed the alligator with a 9 mm. Scott doesn’t feel bad but the sisters are horrified. Scott thinks people can be hypocritical when they use animal products; he just got hands on.

Kourtney wonders if she should spray for US Weekly. Kim once again starts rambling about fashion, saying how thankful she is that Kanye introduced her to all these stylists. Kim says she can’t believe she is that stressed over clothes especially when Kanye doesn’t care what other people think. Kourtney thinks Kim goes to extremes such as in clothes and tanning.

Scott says he’s been having some crazy dreams lately and animals preying on him. Kim feels that Scott feels guilty for killing the alligator. Scott isn’t going to put on his alligator shoes.

Kourtney decides to get the spray tanning. Kourtney feels okay about being on the cover now. Kourtney knows she was being judgmental but she has to admit that the spray tan made her look good. Scott brings everyone on a trip to the Everglades. Scott sees a sign about the vanishing wild life. Kourtney thinks it’s a sign. Scott says he has to lead by example since he has kids and will think twice about what he does in the future from now on.