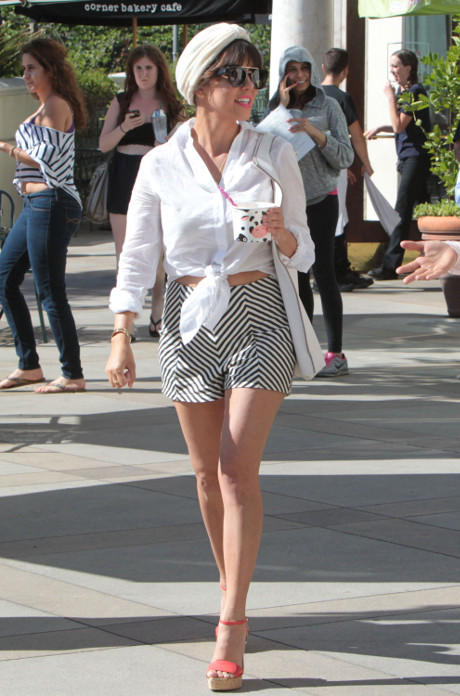 Kim Kardashian‘s parenting skills are already coming under attack, and I think we expected this to happen. But did we expect the attacks to come from her own sister Kourtney Kardashian, who has children of her own? Apparently, Kourtney Kardashian is criticizing Kim Kardashian because she’s refusing to change her lifestyle, even a little bit, in light of North West’s birth. Kim is already preparing to go on tour with Kanye West — and she of course plans on bringing her new lil’ baby right along with her.

Kourtney Kardashian thinks this is not only irresponsible but also potentially harmful to the baby, who probably shouldn’t be travelling so extensively at such a young age.

Radar Online reports, “She was disgusted when she learned Kim plans to take the baby on Kanye’s European tour so soon after the birth,” a source told Life & Style magazine. Kim was not happy about her big sis trying to tell her how to rear her child.“They had a big argument,” the insider said. Kim blasted her sister and other moms previously, saying they had “boring and miserable lives,” and the report says that Kourtney is concerned that her sister’s opinion hasn’t changed.

Kim Kardashian, obviously, loves the energy associated with her celebrity. A friend told the magazine that she enjoys flying around the world, taking multiple flights over a short period of time, and not really caring about where she winds up next. She likes that high she gets from those adventures. But do you think she should be dragging along a newborn on all that craziness? Probably not, and if reports are true, then Kourtney Kardashian is not having it.

What do you think about Kim Kardashian’s recent parenting choices involving North West?