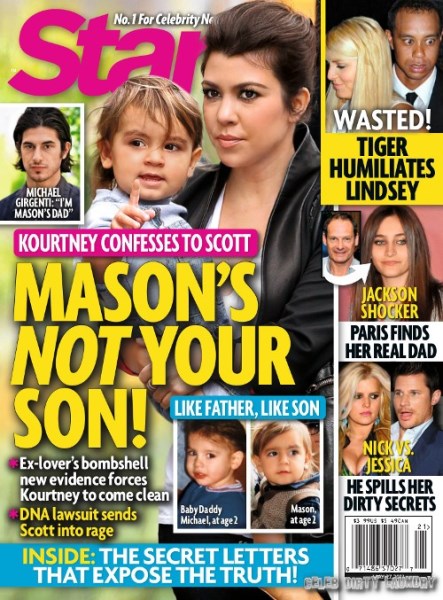 A few months ago Celeb Dirty Laundry told you about the rumor circulating about Scott Disick not really being the father of Kourtney Kardashian’s son, Mason. Frankly, I didn’t think that this was one of those stories that would just fade away and sure enough, it hasn’t. Supposedly Kourtney hooked up with a model named Michael Girgenti while on a break from her relationship with Scott, and he is actually Mason’s father.

If you remember back to Keeping Up With the Kardashians, when Kourtney told everyone that she was pregnant they were in absolute shock because as far as they knew she wasn’t even seeing anyone, let alone Scott. According to Michael he and Kourt had hooked up right about the same time that she would have had to have conceived Mason and he actually wanted a paternity test. He wanted to know whether or not he was the boy’s real father. Now according to the May 27th print edition of STAR Magazine, Kourtney has supposedly admitted to Scott that there’s a great chance that Michael has been telling the truth.

Imagine what this does to their usually shaky relationship! Scott never seems to want the responsibility of parenthood and gets stupid drunk in front of the kids all the time. Meanwhile there’s Michael who seems to be looking for an opportunity to be a good father if Mason is actually his. Talk about major drama./ Supposedly Kourtney was totally against a paternity test and the Kardashians were threatening Michael if he didn’t just disappear but god only knows how all of this will play out now.

Also in the latest issue of STAR Paris Jackson has supposedly found out who her real biological father is and Nick Lachey is finally dishing Simpson family secrets after a 7 year silence! Plus cracks are starting to show in Tiger Woods and Lindsey Vonn’s relationship. Grab the latest issue to read up on all the drama!