The Kardashian and Jenner Clan Yard Sale With Kim But Without Kanye West: Attempt to Convince Viewers They Are A Normal Family (PHOTOS – VIDEO) 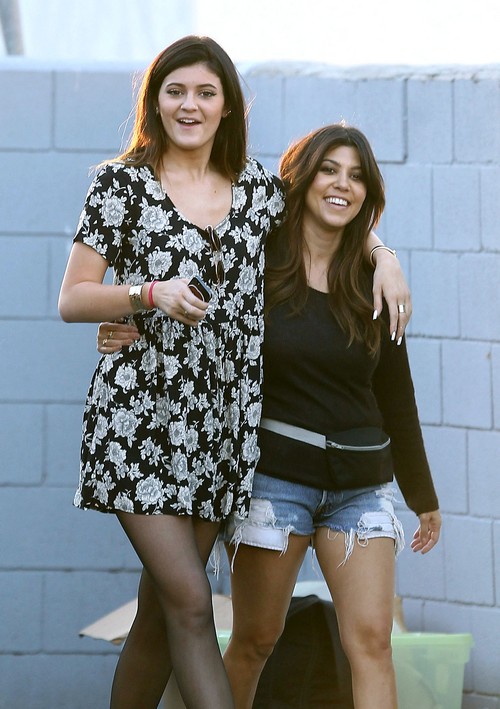 Since Kris Jenner and her crew, have been way over their heads in serious problems lately I guess they realized that they aren’t exactly the most relatable family around. I mean, who else is dealing with a crushed ego because their talk show tanked and whose baller man is very publicly choosing to slum it in a crack house rather than return to a cushy mansion and adoring wife? Right, these are Hollywood problems, not real people problems and so Kris and the family decided that it was time to do something normal, at least by the viewers standards, they threw a yard sale.

Kendall and Kylie Jenner, Khloe and Kourtney Kardashian, Scott Disick and mooch Jonathan Cheban all showed up – with Bruce forced to attend as well – of course Kim was there, falling on her butt (see video) – Kanye West was excused to attend Leo DiCaprio’s bday bash in NYC, lucky man.

I guess Kris was in do-gooder mode because they all decided to match however much money was raised, with the proceeds going to the charities Greater Los Angeles Fisher House Foundation and No Kid Hungry in Woodland Hills, California on November 10, 2013. The family took to social media to advertise the yard sale as of course those cameras filmed it for Keeping Up With the Kardashians.

I love when the Kardashians decide to give something back to the community because it always plays off ridiculously. There is no real connection with the people that that they are helping, instead it seems like even in that moment they are doing somebody a huge favor. Trying to be relatable only works when you don’t continue to act like you are better than those that you are trying to relate to!

Do you think the Kardashians really care about the underprivileged, or was this just something else to do on camera? Tell us your thoughts in the comments below!

The ‘Keeping Up With The Kardashians’ clan hosting a yard sale in which all proceeds would be matched by the family and go to the charities Greater Los Angeles Fisher House Foundation and No Kid Hungry in Woodland Hills, California on November 10, 2013. The Kardashians took to Twitter and Instagram to advertise this event while cameras were rolling. They were even joined by Bruce Jenner, despite his recent split from Kris. Scott Disick also dressed up with a fedora and grey beard as a disguise to try to prank Kris.