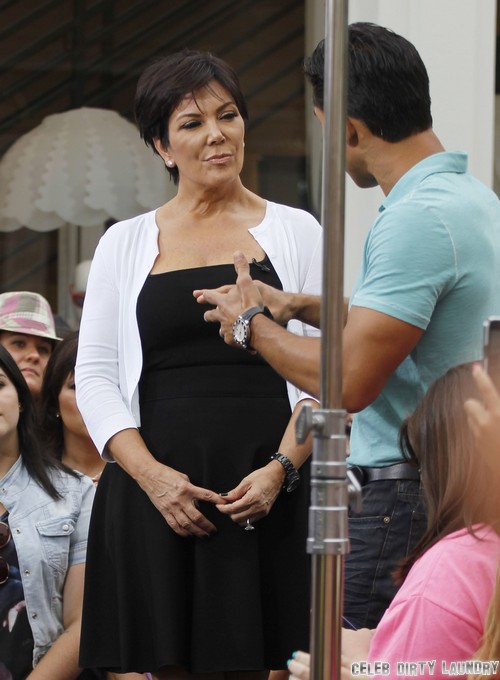 God, how awful of a mother is Kris Jenner? To be very honest, I’m actually surprised that her kids haven’t ended up drug addicts like the rest of young Hollywood. Actually, I take that back – she micromanages their lives and careers to such a detail that they don’t have time to become drug addicts. They’re too busy carrying out Kris’ master famewhore schemes.

The latest lesson in ‘how not to be a good mother by Kris Jenner’ is when Kris decided to expound on her orgasms and sexual experiences in front of her two youngest daughters, Kylie Jenner and Kendall Jenner.

Khloe Kardashian and Kris played a game of ‘I Never’ during Kris’ talk show, and Kris ended up going into a long-winded explanation of her fake orgasms and her decision to join the Mile High Club with her husband, Bruce Jenner. I don’t think the fact that Kylie and Kendall were in the audience even occurred to her, and even if it did, I don’t think she would have cared.

The first ‘I Never’ was ‘I Never faked the Big O’, to which Khloe and Kris both drank. Then, Khloe tries to cover up the incident by saying that neither Kylie nor Kendall would know what the ‘Big O’ was even though they just spent a few minutes discussing what it was! Nice try in pretending to be a good role model there, Khloe.

The next ‘I Never’ was ‘I Never joined the Mile High Club’, to which Kris lets out a giggle and drinks again. Khloe looks on in surprise and asks her with who she joined with, and Kris admits that it was with Bruce. As if we need that image in our heads. Thanks, Kris! Not.

What did you guys think about the latest episode of Kris’ talk show? Do you watch? Let us know your thoughts in the comments.