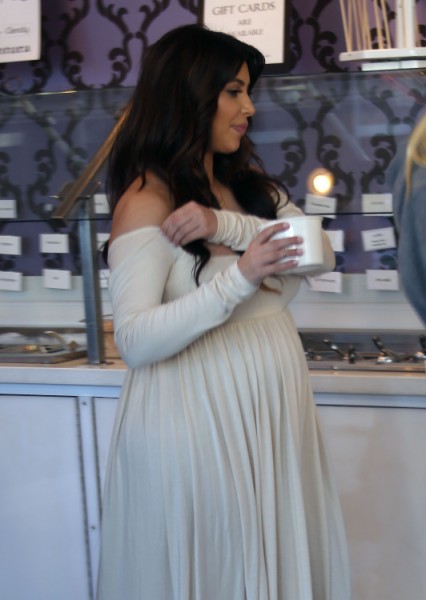 Part of the criteria for being a Kardashian is that you have to think only of the possible dollar signs when confronted with any and every life situation. At first Kim Kardashian was one miserable pregnant lady, taking the most extreme measures imaginable to keep her weight gain under control. Kimmie was busting ass at the gym 7 days a week and resorting to a liquid diet only to gain a dump truck load of weight anyway. Everyone suggested she just embrace the changes with her body and deal with it after she delivers a healthy baby. At first it seemed like she would never do that, until something in her thinking changed and she began listening to momager, Kris Jenner.

Instead of just letting nature take over, Kris suggested that Kim eat to her heart’s content- better yet, be photographed inhaling high calorie stuff. Why? Because it’ll land her a better weight loss deal 6 months from now! The more weight Kim gains the bigger success story she’ll be later on and of course, Kris would get a nice chunk of whatever cash Kim scores.

Where has baby daddy been in all of Kim’s gluttonous misery? Well, everywhere but with her. He has spent a whopping 18 days at her side since announcing her pregnancy last year. Kanye West is using every excuse to stay as far from Kim as possible and truly, who can blame him? He is disgusted by Kim and according to the April 22nd print edition of In Touch, he is furious that she’s taking Kris’ advice. Kanye wasn’t exactly looking to become a father right now, but he’s absolutely fuming that this fame whore family is now finding ways to profit off of his unborn child. I never thought I’d see the day when I could say that Kanye appeared to have a conscience, but in this case he really appears to and it causing him to avoid his baby mama rather than to support her!

Do you think is now using this baby for future PR opportunities? Tell us your thoughts in the comments below!