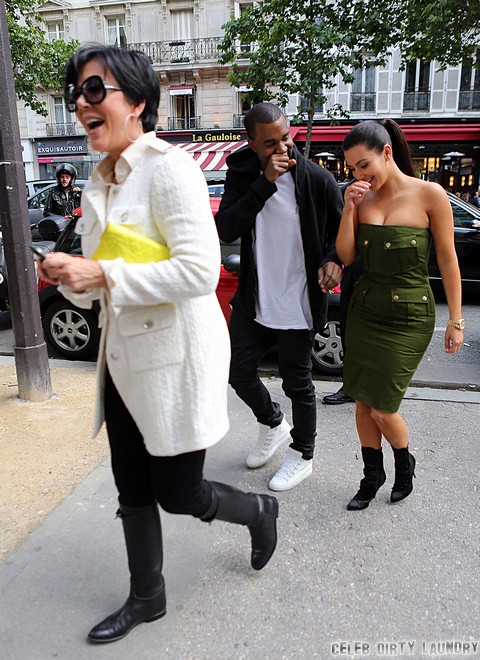 Kris Jenner wants to sleep with Kanye West – it’s as if she’s almost hinting at us to say it. The momager has been impressed with the way the rapper has been spending so much cash on her daughter Kim Kardashian that it’s only fair she gets a piece of that too, right? Jenner has been making constant headlines these past few weeks on how cheated on Bruce Jenner with so many men that the possibility of Bruce not being the father of 15-year old Kylie Jenner is pretty strong.

This only leads us to believe she might have not been turned on by West’s appearances, but his money speaks values. FYI: Kanye’s worth stands at $90 million. If we were wrong to say she is trying to bed Kim’s soon-to-be hubby, why is she making all these comments about how lovely Kanye is and how “impressed” she is with him in interviews? The 57-year old recently sat down with good friend Lance Bass on his radio show Dirty Pop, where she discussed her relationship with ‘ye.

“Well, he is just a great guy — obviously talented and wonderful, but he’s a great guy,” Kris gushed while guest hosting radio show Dirty Pop with Lance Bass. “I am in love with him.” Oh, so now she’s in love with Kanye? Wowza! “You know you date someone in our family, or you marry someone in our family, or whatever it is, you kind of get the whole family,” Kris said. “I’m so impressed with him.” Now, we’re kinda puzzled as to what she meant by “impressed” – it’s gotta be his- oh let’s not go there.

Acting like she cares about her daughter’s pregnancy, she added: “I’m so happy for him and Kim,” before being questioned if the little baby was a boy or a girl: “I don’t know. I don’t even ask anymore,” she said. “There’s just so much going on. But whether they have a boy or a girl, I can’t wait to see what he or she looks like.”

Kimberly is expecting her first child in July, so there’s plenty of time for Kanye to cheat before he devotes himself to being a father for eighteen years, before Kim kicks him out, demands child support of $100,000 a month and the Kardashians continue to cash in on that thing we call ‘money’. What a sad world we live in, right? But you know what, if Kris has a fetish for dark-skinned man like Kim, why not go for it! YOLO, right? LOLz.