Kris Jenner Wants Ireland Basinger Baldwin To Be Her Newest Daughter – Wants to Pimp Her Out! 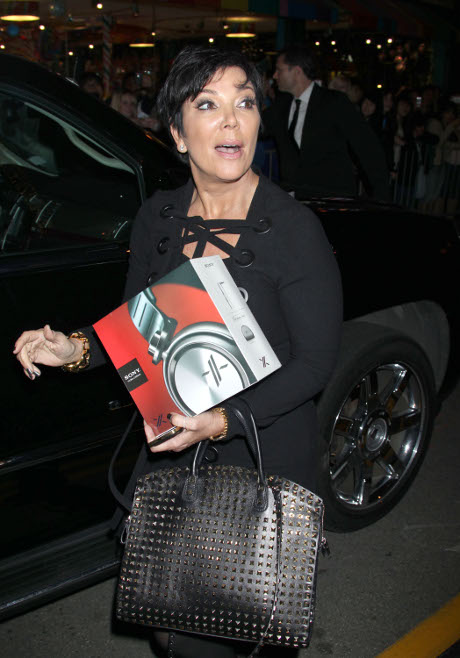 Kris Jenner has never made the list for Celebrity Mom of the Year award, so we were pretty surprised to learn that other parents were letting her around their children! Especially when that child is Ireland Basinger Baldwin, and her dad Alec Baldwin is infamously strict! We first started caring about Ireland in 2007 after Baldwin left her a drunk, screaming voice mail after she didn’t answer his call for their phone date. She was 11-years-old, but he called her a rude pig! Talk about strict parenting! Since then, Ireland has been going the Kardashian way, sharing sexy photos (Ireland Baldwin bikini scandal click here) on her Twitter account and enjoying life in the spotlight.

Now, Ireland is getting even closer with bestie Kendall Jenner’s family—she’s actually hanging out with momager/pimp Kris! Last night, while drunk at a Clippers game, Kris tweeted, “I love you @irelandbasingerbaldwin !!! Lets go clippers!!!” But it doesn’t look like Kendall Jenner was at the game, based on the Kardashian’s collective Twitter feed. Later, Kris tweeted,“Oh hi @kendalljenner !! Love you @irelandbasingerbaldwin.” We know Kris was seriously smashed at the game, because Khloe Kardashian posted a hilarious drunk video of her mom on Keek. So what’s up with world’s strictest dad letting his 17-year-old daughter into the clutches of dragon lady Kris?

I’m thinking that, since her marriage is falling apart, threatening the foundation of her entire empire, Kris is looking to expand her momager-ing to other people’s kids, starting off with Kendall and Kylie Jenner’s friends. She already knows that Ireland won’t balk at inappropriate pictures, since she famously tweeted a bikini photo with the caption, “Sea Urchin sashimi is sushi sex explosion in your mouth.” And although her response was “ermmmm no. Never,” to the question “Will you do Playboy when you turn 18,” we expect she’s growing as a person and realizing that you should never say never!

Of course, unlike besties Kendall and Kylie, her family is established as real celebrities, not sex tape reality stars. But maybe she’ll take Kris up on her mentoring offer and leave the respectable family business to join the Kardashians! Do you think the Kardashians are rubbing off on Ireland? Do you think Ireland should distance herself from Kris Jenner (famewhore)?