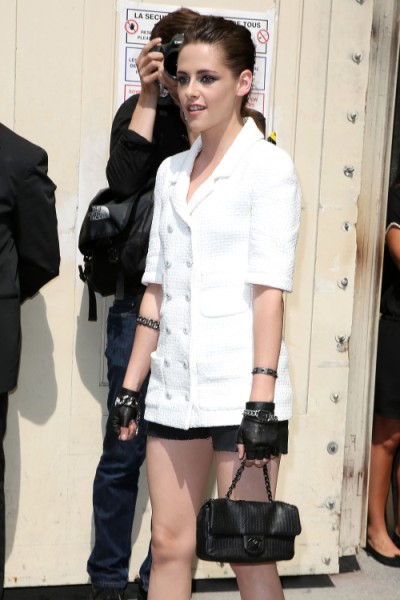 At the runway show in Paris for Chanel, Kristen Stewart looked light years different from the sullen, contemplative girl who boarded a plane out of LAX only hours earlier. Riley Keough who? I wonder if some of Kristen’s people called her after she landed and told her to man up for the cameras. Stop with the bitch face! Everyone thinks you’re pissed off about the Robert Pattinson, Riley Keough dating rumors!

But after checking out these pics I’d say Rob’s dating life is the last thing on her mind. Biotch looks fierce, yes? As always with Kristen, she reminds me of a teenager dressing up in clothes way too old/sexy for her but this ensemble doesn’t bother me. It’s pretty rad actually. I’m digging the over-sized white jacket and black shorts. It’s the perfect look for what’s going on. Oh, Rob’s playing ping pong with Elvis’ granddaughter in Los Angeles. I’m sitting front row at  Chanel Haute Couture presentation. Suck on that! She even has a little smirk on her face. It’s her go-to expression for fashion appearances but it could be speaking volumes here. Is Kristen finally over Rob? Is she done with the fact that he dumped her and presumably is moving on with not only other girls, but her friends? That’s what I don’t get about super sensitive, guitar playing, emo-esque, I’m too handsome to be taken seriously, Pattinson. He had every right to dump Kristen. He had ever right to move on and start dating again. But why does he have to keep hanging out with her girlfriends? Yes, they had an inner circle. Yes, her friends were technically his friends. But god damn where’s Tom Sturridge?? Not to ever paraphrase Jennifer Aniston but is there some sensitivity chip missing?